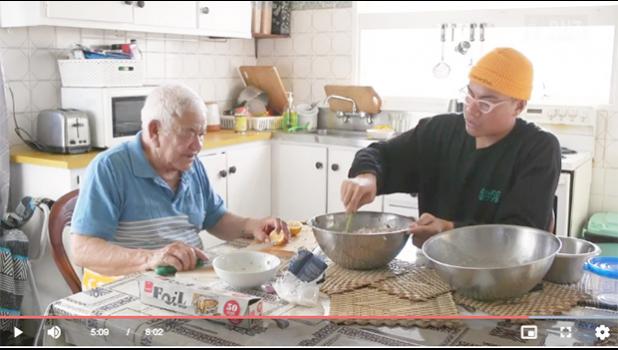 "I'm my Papa's namesake and we're similar in many ways. But I'm nowhere near the Michelin star chef that he is. Whether it's Christmas, or Easter - he's throwin' it down in the kitchen as I'm sure every Pacific family is for their to'ona'i. There's something about my Papa's cooking especially though, or maybe it's his charm that comes as the side dish, that draws in grumbling Samoan appetites all the time.

"Faasootauloa Fepuleai Galo Fagaiava is his name. He's the most patriotic Samoan that I know and that says a lot, because we're a hearty bunch. 685 to the oki, Samoa Mo Samoa etc.

"He's not only my reference point for cooking like as you'll see in the video, but everything to do with fa'a Samoa. His number one tip for anyone trying to become closer with their culture: take baby steps. It's this nature of understanding that makes me proud to be his grandson. I admire the stories behind every step of the cooking process, even the witty criticisms of when my "valu le popo" game isn't to scratch. When we've finished in the kitchen, it's his guiding wisdom that keeps me grounded in this crazy world.

"Ia manuia lava le vaiaso o le Gagana Samoa! Happy Samoan Language Week. Take note as my Papa takes me and you at home, through the process of making oka."