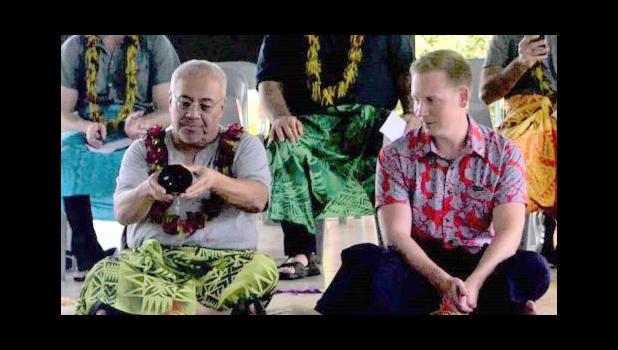 Apia, SAMOA — Award winning musician and son of the late jazz legend, Mavis Chloe Rivers was welcomed in an Ava Ceremony shortly after he arrived in Samoa this week. La’auli Matt Catingub is seen here accepting his Ava during a welcome ceremony.

La’auli Matt Catingub and the Mavis Rivers Tribute Band will be performing a tribute concert to the late Mavis Rivers (1929-1992) who Frank Sinatra once referred to as the purest voice in jazz and was known in her life as “Polynesia’s First Lady of Song”.

Her son, who is a Grammy Award Winning musician and composer in his own right, will lead the tribute to bring his mothers’ memory back home.

The concert will be opened by the US Air Force Band of the Pacific 7-piece Jazz Ensemble, Papana. Rounding out the sextet are three musicians from the United States – Steve Moretti, Kevin Axt and Christina Sousa along with two musicians from New Zealand – Mike Booth and Andrew Hall.

The special tribute concert to honor Mavis Rivers achievements in music will take place in both Samoa and American Samoa. In American Samoa, Gov. Lolo Matalasi Moliga has declared this week — Nov. 5- 11 — JAZZ WEEK in honor of Mavis Rivers.

American Samoa’s tribute events will happen beginning Friday, with Jazz Fiafia Night at the Tradewinds Pavilion, Saturday - Cabaret Night - Tribute to Mavis Rivers at the Gov. H. Lee Auditorium, and Sunday- Jazz at the Beach, at $2 Beach. The Saturday event is the “Mavis Rivers Tribute” signature event. Friday and Sunday’s events will feature international jazz musicians, as well as local groups and a Polynesian group from San Diego — the