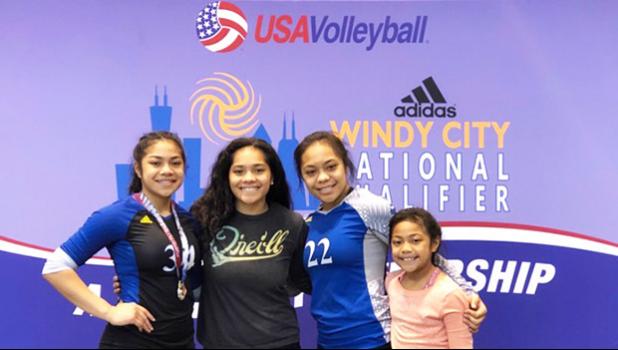 Pago Pago, AMERICAN SAMOA — Two daughters of American Samoa are getting ready to compete at the 2019 USA Volleyball Girls Junior National Championships, set to be held in Indianapolis, IN June 27-July 6.

Misipeka sisters: Kanoelehua, 15, and Nela, 13, will be representing the territory at one of the biggest national junior volleyball tournament in the country.

The girls are part of the Adidas Dynasty Volleyball Club of Kansas City, KS.

As an added bonus, Kanoelehua will be featured in a few Adidas story lines about the Club, and breaking barriers.

According to their father, Keiki, the Adidas Dynasty Volleyball Club teams are not only the top teams in the Midwest region, they are also ranked in the Top 5 in the country.

Both Kanoelehua and Nela will be competing in the Open Division.

“Every year, volleyball clubs from across the country compete during an 8-month season to earn bids to this prestigious finale,” said Keiki.

The Misipeka family moved from American Samoa to the United States in 2013 and have settled in the Sunflower State. While in the territory, Kanoe and Nela attended Manulele Elementary and Manumalo Academy.

“It is important to us to support our kids and give them every opportunity here in the US,” said Tufi, the girls’ mom. When the Misipeka family left American Samoa in 2013, there was no set destination. Keiki and Tufi, of Fagatogo and Nuuuli, just wanted to give their children an opportunity to explore more outside of their island home.

Kanoe started playing volleyball when she was 8 years old in Hawai’i, for club TAVA for which her Uncle Winston and Aunt Lynette Lum were coaches. In 2015, the Misipeka family moved to Las Vegas, NV where Kanoe’s development and skill level through Las Vegas Aces Volleyball Club improved tremendously, under Coach Ruben Herrera.

“In 2017, my family moved to Garden City, Kansas to be with my Dad. It was one of the hardest moves for me and my siblings. I was playing for one of the top clubs in Nevada, and I had to leave some of my family and friends behind,” said Kanoe.

“My husband and I realized Kanoe’s development would not improve without the resources and proper coaching, living in Garden City,” Tufi explained. “I knew of Adidas Dynasty Volleyball Club from travel competitions we’ve participated in, and contacted them for a tryout for Kanoe.”

Tufi was able to get a hold of Club director/ founder Bryon Larson and assistant director Coach Andy Oaks and they were willing to give Kanoe a chance.

Tufi, with Kanoe and Nela riding along, drove 6 hours to Kansas City for the tryout.

Nela was only 11 years old at the time.

“When we arrived to the facility, Kanoe was very nervous, excited, and determined to show what she could do,” Tufi recalls. “Coach Larson needed an extra girl for a drill and asked Nela to jump in. After the tryout, Coach Andy offered Kanoe a spot on his 14U Black Team.

“Then the unexpected happened when Coach Larson extended an offer for Nela to be on his top 12U Black team. Nela was undeveloped and never played competitive volleyball, but the coaches saw something special in her. This is her second year playing under the direction of Coach Larson and she is one of the team captains,” said Tufi.

“It wasn’t a hard decision for my husband and I to make. After all, this is why we left our beautiful home of American Samoa, to give our kids every opportunity to succeed.”

Kanoe and Nela accepted the offer and moved to Kansas City with their mother, and started getting homeschooled. Their schedule had to be flexible so they could travel between Kansas City and Garden City where the rest of their family lived.

“The hardest thing about moving to Kansas City was balancing out my schedule in caring for my elderly father,” said Tufi, whose mother passed away not long before they relocated off island.

“It wasn’t easy for us to be away from our family and Papa. My parents, siblings, Aunty Amuia and cousins all pitched in to care for him. My parents instilled in us the importance of caring for the elderly, respect, hard work, and to be humble,”. said Kanoe.”

In the two years since playing for Adidas Dynasty Volleyball Club, Kanoe and Nela have developed into great athletes. The coaching staff at Dynasty consists of extremely knowledgeable individuals of the game. Two of the coaches are of Samoan descent: Tui Atagi and Conan Salanoa.

“The competition level at Dynasty is unreal, the coaches are always challenging us and our teammates to push each other. Kanoe and I are extremely grateful to be a part of the Dynasty family,” said Nela.

Adidas Dynasty teams are nationally ranked every year, winning tournaments across the country. “Nela and Kanoe have brought so much to Dynasty. Their work ethic, passion, and team-first attitude separates them from their peers. Both girls are amazingly skilled and strong for their ages, and they are humble and hungry to win. It’s been an absolute joy to coach the Misipeka kids!” said CEO/Coach Bryon Larson.”

Kanoe and Nela’s little sister Kalei, 8, has been training with the Dynasty development team - “Dynamites” - and is coming along great.

This coming weekend, Kanoe and her teammates will be featured in a few Adidas storylines, as well as the Adidas Three Stripe Live stream, launching this weekend. (Tune in Live via Twitter @3stripelive on Friday when Dynasty 15U faces off against MetroVB of D.C.)

After the tournament, one of the hardest decisions the Misipeka family will be faced with, is the move back to American Samoa.

For those who don’t understand the Samoan culture, said Tufi, God and family is central in their lives and one of many important duties is to honor and care for the elderly.

“My grandfather’s wish is to return home to American Samoa. Our family will honor his wishes and move home a week after nationals,” said Nela.

“The seven years I’ve been away from home, I have learned so much and would like to thank Tava Volleyball Club (Hawaii), Las Vegas Aces, and Adidas Dynasty for all the knowledge, skill set, coaching and development they have taught us throughout the years. I’m able to share all that we have learned thus far to help coach the young children of American Samoa. There is still more to learn, and grow,” Kanoe concluded.