New NOAA video highlights importance of fishing in Am Samoa 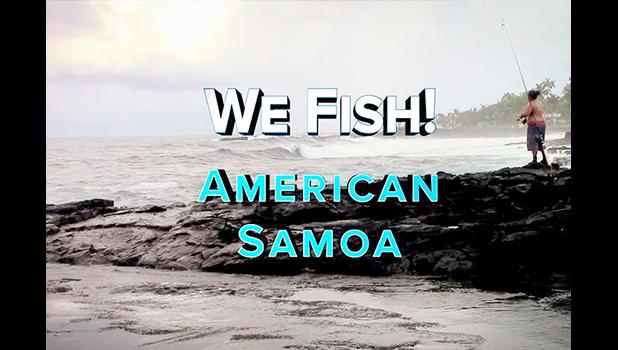 Pago Pago, AMERICAN SAMOA — NOAA Fisheries is proud to release We Fish! American Samoa. It is a collaboration with local fishermen and fishing communities to tell the story of recreational and non-commercial fishing in American Samoa. The video gives a glimpse into the different types of fishing methods common in the territory. Interviews with local fishermen help stress the importance of these activities in daily life.

“It is an expected part of life that we rely on the ocean and on the land for food and for provisions of families’ livelihood,” says Sili Satatua from the Village of Fagasa on Tutuila Island, American Samoa.

We Fish! American Samoa reveals the traditional Samoan practice of sharing within the community, and the need to act as stewards of local marine resources. It highlights the importance of non-commercial and recreational fishing—both in American Samoa and across the Pacific Islands region. It is a resource for food, an outlet for fun and education, and a way to perpetuate cultural family practices and the conservation of marine resources for future generations.

FISHING AS A WAY OF LIFE

Non-commercial and recreational fisheries contribute heavily to the communities and economies across American Samoa, the Commonwealth of the Northern Mariana Islands (CNMI), Hawaiʻi, and Guam. Catch from these fisheries contribute to local seafood markets and subsistence, and is often shared with friends, family, and the larger community.

Fishing is a way of life in the Pacific Islands. Recreational and non-commercial fishing knowledge and activities often serve as an important way to pass on cultural and social traditions. These activities also educate and empower communities to help restore and protect our ocean’s resources for future generations.

In American Samoa, communities are deeply rooted in the traditions of fishing. Recreational and non-commercial fishing are a large part of the past and present culture. Much of the Territory’s 55,000 residents rely on seafood as a main source of protein.

Faʻa Samoa (the Samoan way) retains the identity and cultural respect throughout the islands’ fishing traditions. Some of the older traditions have been supplemented with more modern equipment. Older cultural harvesting methods, such as fish traps, gleaning (collecting invertebrates in the shallows), palm frond nets, and slingshot fish spears, are still taught within the villages.