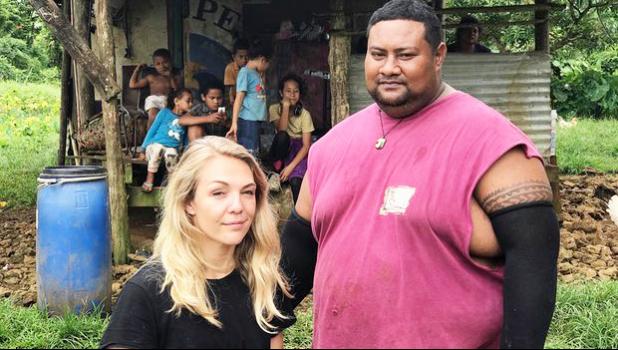 By
Sam Wollaston, The Guardian
Having rejected local food in favor of processed western junk, nine out of 10 people on Samoa are overweight. Sophie Morgan uncovers a quiet epidemic

Even so, I found it shocking. At the diabetic foot clinic in Samoa, 41-year-old Annie is having flesh scraped away with a scalpel from a seeping open wound on the underside of her swollen foot. She’s not in pain – she can’t feel the foot, and the flesh around the wound has started to die. No anaesthetic required. In fact she’s asleep. As well as the type 2 diabetes, another side effect of Annie’s obesity is sleep apnea.

I’m not enjoying this. Not that I’m supposed to. It doesn’t look like reporter Sophie Morgan, whose sad film it is, is either. Just as it didn’t look as if she was enjoying her tea the night before. Mmm, mutton flaps – a cheap offcut of sheep belly, 40% fat, imported from New Zealand where it’s only fed to dogs.

Sophie’s host, Tavita, who is trying to lose some of his 378 lbs., has his own mutton flaps hanging off his chest. And he’s not at all alone; in the Samoan islands, nine out of 10 adults are obese or overweight. It’s one of the few places in the world where life expectancy is on the slide.

The mutton flaps are part of the problem. And the turkey tails. And all the other high-fat imported foods, tins and sugary fizzy drinks, along with a perception that traditional local food (lovely looking vegetables, rice, fruit, fish, etc) is somehow inferior.

Obesity and diabetes are not just a problem in Samoa, of course. It’s just that in the Samoan islands, the crisis is superconcentrated. There are problems with attitudes and education, and simple denial. In neighbouring American Samoa, a nice 28-year-old diabetic woman called Laurie Mae laughs and says she hasn’t really changed her diet since becoming pregnant, even though it might mean she loses the baby. And back at the foot clinic, another woman, in danger of losing an entire foot, doesn’t seem to know why she has diabetes.