Our Diversity: Weaving together skill, tradition and love 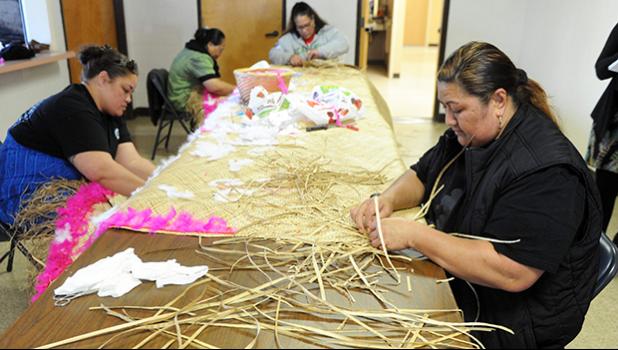 STOCKTON — Growing up, Falesoa Iaulualo and Sopo Saina watched as the women in their families would gather to create intricate mats made from the leaves of the pandanus tree.

Weaving the mats is a skill and tradition Samoan women for decades passed on from one generation to another. And giving and receiving a fine mat, or ’ie toga, is just as essential to the Samoan culture.

Saina remembers being 13 years old and watching as the matriarch in her family created fine mats. The tradition is definitely significant and worthy of being passed on, but it’s being lost with younger generations who have little interest in the practice, the 59-year-old said as she hot glued neon pink and white feathers to a mat. It’s hard for them to learn but it would be nice, she added.

Saina was among a group of women from Stockton’s Puna Ole Ola Congregational Christian Church, which rents space from the Zion Lutheran Church at 808 Porter Way, who in March repaired and brightly decorated with feathers a fine mat that was gifted to a family in Antioch.

Iaulualo, 48, also learned in her teens by watching family members, especially her grandmother. However, the mat the women worked on last month is the first mat she’s helped partially weave. She said she and the other women spent several weeks weaving the pencil-thin strips of leaves to patch holes, but creating a fine mat from the start can take months or years depending on the size.

Puna Ole Ola Pastor Alatina Saina said the women volunteered to restore and decorate a mat, which was so big it draped over two tables, that was approximately 20 years old and in its life had been through Samoa, New Zealand and Australia before being given to the Puna Ole Ola Congregational Christian Church during an event.

The mat was faded and had rips and holes, Saina said. And the women made it “look presentable and beautiful for the family.”

Once finished, Saina and members of the 100-person Puna Ole Ola congregation presented the mat to the family of Sioea Leota, a late preacher of the church, who died in February.

Fine mats are presented as gifts to show respect to people during funerals, weddings or any Samoan cultural event, said Alatina Saina, who has been the pastor since 2000 and has received about 50 mats. The bigger the mat, the more significant.

“It’s very special in our culture,” he said. “At every special event, you’ll see these mats.”

Saina explained the tradition of presenting mats dates back to the 1800s when missionaries traveled to Samoa and introduced the Bible. He said at the time the kings in the islands exchanged their fine mats for the Bibles. Since then, the fine mats are seen as a valuable gift because of the knowledge, dedication and materials it takes to complete them, he said.