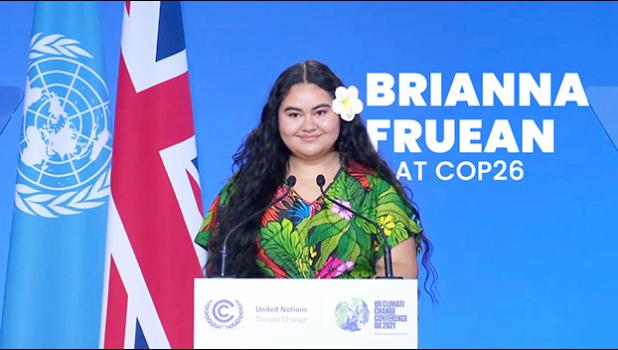 Glasgow, SCOTLAND — A New Zealand Pasifika climate activist has told the UN climate meeting that young Pacific people are not victims of climate change but beacons of hope.

The Leaders Summit is wrapping up at COP26 in Glasgow.

Environmental advocate for Samoa Brianna Fruean said Pacific people were not just victims of the climate crisis, but were beacons of hope.

“This is our warrior cry to the world – we are not drowning, we are fighting.

“This is my message from earth to COP.”

She said Pacific countries were living in the reality of climate inaction with more frequent cyclones, floods and coral bleaching.

If the world leaders at COP failed, the people will step up, she said.

“I believe that COP is like a compass, that we are all in collective canoe and if we’re able to get COP right we can be pointed in the right direction.

“But at the end of the day, my ancestors travelled the oceans without compasses. So if COP doesn’t work, the people will.

Their work at the Paris agreement in 2015 was instrumental in getting the world to agree to try and keep warming to 1.5 degrees.

The world’s current emissions pledges will allow 2.7 degrees of warming, which will be catastrophic.