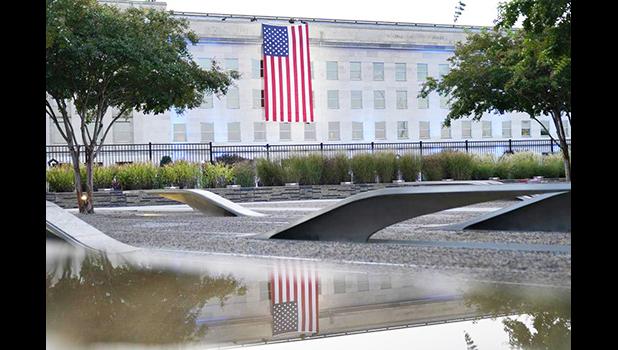 compiled by Samoa News staff
And we will never forget our Toa o Samoa who died defending the nation in the war on terror that resulted from the 9-11 attacks.

Pago Pago, AMERICAN SAMOA — The images of the 9-11 attack are seared into our memories as a nation. In American Samoa, we were awakened hours before dawn by frantic calls from friends and family in the mainland telling us to “turn on the TV”. Many young Samoans continue to enlist in the US Armed Forces — to become a part of the ‘price of freedom’. They are known as the “Toa o Samoa”.

In Washington D.c. Congresswoman Uifa’atali Amata remebered the heroic stories and lost lives on September 11, 2001, as Saturday marks the 20th anniversary of the attacks.

“Our nation will always remember September 11th, and this year marks 20 years since the attacks that changed our country and revealed many heroes. Most people remember where they were when they first heard or saw the news. I was in Washington, D.C., and I remember the chaos of that emotional day, including taking hours to drive a few miles across town in traffic, and seeing the dark smoke against the sky from the nearby Pentagon. We knew the world had changed.

“September 11th will always be a day that causes us to think of the thousands who lost their lives, the grief of the families who miss their loved ones today, and the brave actions of those responding to save as many as possible. History will preserve the incredible bravery of the firefighters, police, first responders and the passengers on Flight 93, and individual acts of kindness and selflessness in personal stories from those who were there.

“Today we say a special thank you to all the law enforcement, firefighters and first responders, knowing we rely on your professionalism in a time of crisis. Over these 20 years since, an entire generation has served in our Armed Forces, including many from American Samoa. We are so grateful to all our Veterans and our Service Members.

“May God bless American Samoa and the United States with peace and freedom.”

•           Pvt. Jonathan I. Falaniko, 20, was killed Oct. 27. He was near the Al Khadra Police Station in downtown Baghdad when a vehicle containing an improvised explosive device detonated, killing him and another solider. He was assigned to A Company, 70th Engineer Battalion, 1st Armored Division, Fort Riley, Kansas.

•           Army Staff Sgt. Salamo J. Tuialu’ulu’u was killed on Dec. 4 in Mosul, Iraq, when the vehicle he was riding in came under machine gun and rocket fire in an ambush by insurgents. He was assigned to the 3rd Battalion, 21st Infantry Regiment, 1st Brigade, 25th Infantry Division, based in Fort Lewis, Wa.

•           Marine Corps veteran Sgt. Faoa “AP” Apineru, 31, died July 2 from head injuries he suffered during his tour in Iraq in 2005. Faoa died at Palo Alto Veterans Hospital where he was undergoing therapy for traumatic brain injury.

•           Army Sgt. Lui Tumanuvao, 29, was killed on Nov. 7 in Arad Jabour, Iraq from wounds suffered when he was struck by an improvised explosive device during combat operations. He was assigned to the 1st Battalion, 30th Infantry Regiment, 2nd Brigade Combat Team, Fort Stewart, Ga.

•           Marine Lt. Col. Max A. Galea’i, 42, died June 26, 2008, while supporting combat operations in Al Anbar Province in Iraq.  Galea’i and comrades Cpl. Marcus Predhomme of Florida and Capt. Philip Dykeman of New York were killed at a monthly meeting with local Iraqi leaders and security officials in Anbar Province, Iraq, when a suicide bomber attacked.  He was the first battalion commander killed in Operation Iraqi or Enduring Freedom (Afghanistan), the military has said. He was laid to rest at his family home in Leone in early July.

Army Spc. Casey L. Hills, a member of the local Charlie Company when the local unit was deployed to Kuwait was killed June 24 in Iraq.

The twenty-three year old Hills of Salem, Illinois, died from injuries sustained during a vehicle roll-over. He was assigned to the 100th Battalion Pago Pago, American Samoa.

Hills was laid to rest in his hometown in early July.

His remains were brought to American Samoa in early September and laid to rest at his home in Leone village.

He is a 2000 graduate of Leone High School— where he played football. Heather served one tour of duty in Afghanistan in 2004 and two tours in Iraq. His first Iraq tour was in 2002 and his last tour of Iraq ended in July this year.

Army Sgt. Vevesi Semu Jr., 35, was a member of the 3rd Brigade Combat Team, 1st Infantry Division based in Fort Hood, Texas. He died of a drowning incident on Aug. 8 in a cove near the Central Texas Boatman’s Club.

His remains were returned to the territory and he was laid to rest at his home in Nu’uuli.

A graduate of Nu’uuli Poly-Tech High School, Semu had returned in July following a tour of Afghanistan. He is a former employee of the American Samoa Power Authority.

American Samoa native, U.S. Army First Lt. Jason Togi of Fagasa and a 2006 graduate of Samoana High School was killed in the Afghanistan conflict in August 2013.  He is the son of Mr. and Mrs. Alepapa Togi.