Sam Noa — born in Am Samoa, working with kids in Carson CA 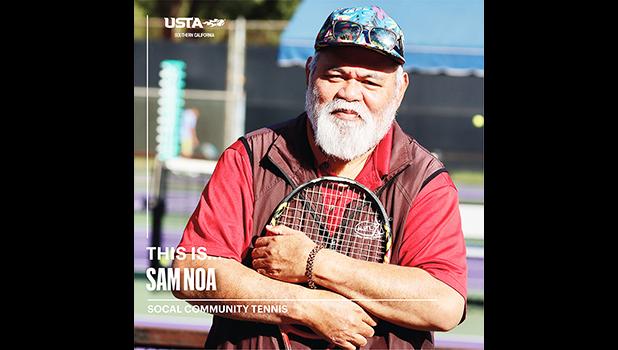 By
Steve Pratt for U.S. Tennis Assn. SoCal
Reprinted with permission
“Someday I want to return home with my tennis program”

Carson, CA — You can’t blame Sam Noa for choosing to spend some of his time while serving his country sweating on the tennis court rather than in the field training for battle.

A natural athlete who grew up in American Samoa – the longtime Carson, California resident Noa had come to live in the United States at age 17 in 1972.

Noa enrolled in the Army following graduation from high school a year later and quickly picked up the game of tennis after discovering it at Monterey Peninsula College, a community college he was attending on Saturdays near his base.

“I found out that if you learned to play tennis you could play with the officers and you didn’t have to go into the field,” said Noa, who for the past 20 years has run the Semurana Tennis Association, an NJTL and USTA SoCal CTA chapter out of Victoria Park in Carson. “That’s how I fell in love with the game of tennis.”

Noa goes a little further to explain how he met the love of his life in a humorous way: “I was in the Army and stationed at Presidio of Monterey. It was the summer of 1974. It was here that I met this beautiful, talented, and athletic young lady name Tenisi (tennis). Our friendship is still going strong and tennis has continued to have a noteworthy influence in my life and my family. My family is a tennis family. I am grateful to my Uncle Sam for placing me at the right place where I met my first friend for life.”

At MPC, Noa enrolled in a tennis class taught by the men’s tennis coach who asked him to come out for the tennis team. “He was also the football coach, so I think that’s kind of why he invited me,” Noa said. “That’s when I got hooked on tennis. You know you’re hooked when it rains and you can’t play, and you’re upset.”

Growing up in American Samoa, Noa played island-favorite games like rugby and cricket. Following his time in the service, Noa moved to Oceanside, California and attended MiraCosta College where he played two years on the tennis team.

Noa’s family moved to Carson in the 1980s and he went back to Hawaii to finish his school. Originally wanting to become a teacher, Noa instead chose to work with kids for the City of Los Angeles City of Parks and Recreation and is now retired.

Noa currently has about 30 kids in his NJTL program, which includes clinics and an after-school education program. The Semurana Tennis Association (STA) gets its name from Noa’s grandmother. He said he chose the name because his wife has always liked it.

“At the Semurana Tennis Association (STA), the connection of education and tennis (sports) is highly recommended, because as we say, ‘bad grades, no play,’ ” Noa said. “We believe at STA that having a good education and good grades can lead to successful future.”

In retirement, Noa has become an author publishing the book titled: “Vavega Ole Taumalulu (The Winter Miracle), a true story about how his grandchildren ran away from their Utah home to be reunited with the Noas in Carson.

Noa will continue working with the kids in Carson and teaching the game he fell in love with all those years ago. “Someday I want to return home with my tennis program and I’d like to do some more writing,” Noa said. “And of course, lots of tennis. You’re never too old for tennis.”