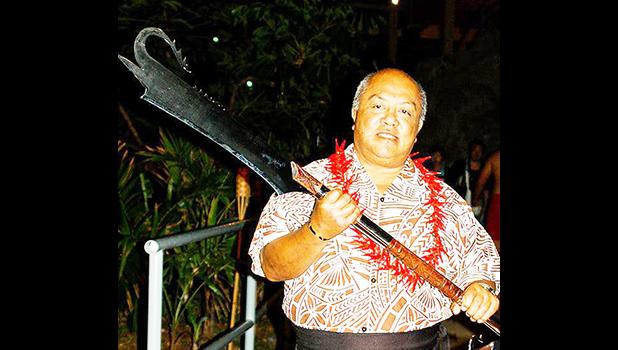 Honolulu, HAWAII — Family, friends, colleagues, fellow entertainers, other Samoan cultural experts, fire knife dancers and many others bid a “fond farewell” to Pulefanolefolasa Feagaimaali’i Galea’i during three recent events spread over three days. It was an unprecedented tribute by professional fire knife performers in front of his long-time home on Kulanui Street in Laie followed by two separate funeral services.

Surrounded by blazing torches, the fire knife dancers, students – many of them relatives, and friends – marched along Kulanui St. to the Galea’i home on the evening of June 21, 2021, to the cadence of familiar drumming and performed on a scale even people in Laie have rarely seen.

Pule, or Pulefano as almost everybody called him, would have definitely approved, though typically, he might also have made suggestions on how the presentation could have been enhanced. That’s what he had done for many years at the Polynesian Cultural Center, as well as his own groups and numerous other events and competitions he helped stage in Honolulu, American Samoa and the U.S. mainland.

Even as a young teenager, Pulefano had begun to show his potential. He was was born in Mapusaga, American Samoa, in 1945; and like quite a few American Samoans, the U.S. Navy gave his father, Tuia Feagaimaali’i Galea’i — who was already recognized as a Samoan cultural expert, and several of the older boys in the family, the opportunity to migrate to Laie in 1952. Like many before and since, they came seeking a better education and to receive the blessings of the Laie Hawaii Temple — the only one in entire Pacific basin at that time.

Mike “Mikaele” Foley, who knew and worked with Pulefano (and other of his family members) for a little over 50 years. As a young missionary in Samoa in the mid-1960s, he also served in Pulefano’s father’s ancestral village of Fitiuta, Manu’a, and his mother’s ancestral village, Āua, Tutuila, American Samoa.
END_OF_DOCUMENT_TOKEN_TO_BE_REPLACED