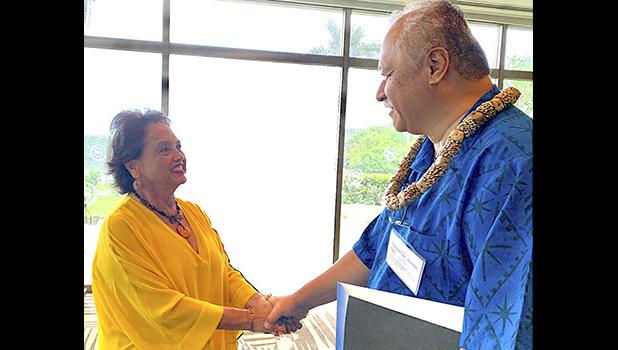 According to organizers, the conference brought together a wide array of civil rights pioneers, from elected officials to scholars to community activists, hailing from Australia, the U.S. Virgin Islands, Puerto Rico, Hawai’i, American Samoa, the Northern Mariana Islands, Belau, and West Papua.

Melvin Won Pat-Borja, executive director of the Guam Commission on Decolonization, said the invited presenters are individuals who have made a profound impact in their respective communities on issues of human rights and decolonization.

The governor of Guam is also the chairwoman for the Guam Commission on De-Colonization.

On Sept. 14th, Tapaau said he participated in a meeting with Commissioners on Guam's next step after the federal Ninth Circuit Court of Appeals ruled on Guam's law restricting those who can vote on their political status plebiscite only to "Native Inhabitants of Guam".

The court said it was an "impermissible racial classification in violation of the 15th amendment." (See Samoa News Aug. 9th edition for details on the court’s ruling.) Earlier this week, Tapaau spoke at the University of Guam.

Tapaau (standing) as he was introduced during the Sept. 12-13 international conference, “Fanhita: Our Continuing Quests for Decolonization” in Guam.

Tapaau was among the speakers invited to the international conference. He spoke about American Samoa's political status, the two US citizenship cases, and the educational outreach strategies his office developed in the last few years.