Texas i Samoa Church celebrates chapel groundbreaking with a luau 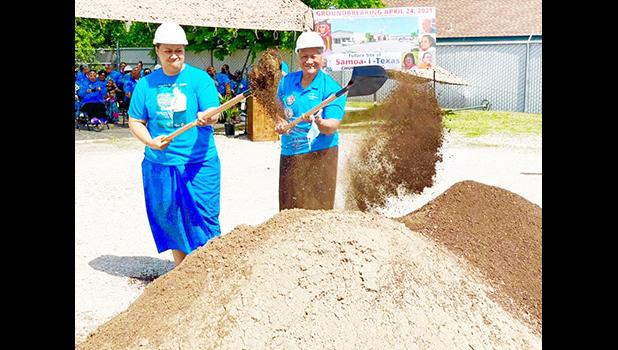 Attendees celebrated with Samoan food, music, and dance.  Lay Minister Leasina Lefotu opened with prayer and congratulatory remarks followed by group and family photos.  Every family was provided a set of personalized hard hats and shovels to break ground with. The event had activities for all ages: inflatables for the kiddos, a hilarious game of adult musical chairs that left a few bruises, and a senior citizen talent show that had some of the ladies rolling down the mounds of dirt onsite to roaring laughter and applause.

A little bit of home in Texas — yum, yum onolicious — a Samoan plate- taro, BBQ, fasi poi masima, rice — served at the groundbreaking of the Samoa I Texas Church in Killeen, Texas. The construction of the new 11,000 sq ft worship space and classrooms are the final phase in a 20-year plan. [courtesy photo]

Many at the ceremony wore aqua colored shirts with a photo of the late Rev Menise Sasa, who passed away in March.  Church members view the construction of a Samoan Church in Texas as an embodiment of his legacy in the worldwide Samoan community, especially the active duty and retired soldiers in Central Texas for the past 30 years.

Church members gather for a group photo in front of the large banner showing the new building and portraits of 6 church members who were vital to this project who passed away before it’s completion. [courtesy photo]

Samoa-i-Texas began in 1993.  Services were held in Army chapels, while sunday school, potlucks, and meetings rotated amongst members’ homes and local parks.  In 2001, the church purchased a warehouse situated on a 3 acre property as their new home.

The construction of this new 11,000 sf worship space and classrooms are the final phase in a 20 year plan. In 2010, the warehouse was renovated into a modern meeting hall and church run daycare center, Koinonia Christian Academy.

The church, alternates worship locations every Sunday between Ft Hood and the current meeting hall in Killeen since increased security to enter the military installation have made it difficult for non military members to attend.

“We want to create a safe haven for both military and nonmilitary families who want to worship in the Samoan language and for our evening English services. Our congregation has grown to include many worshippers who are non-Samoan and from other Christian denominations” said Deacon Sivia Sasa, Project Leader.

"After 30 years, we finally have a permanent site to worship without restrictions. Viia le Atua, praise the Lord, we did it." said Tu’u Falefia, Chairman of the church board.

Close up of the large banner at the groundbreaking site shows the new building and portraits of 6 church members who were vital to this project who passed away before its completion.  [courtesy photo]

Construction of the new church building will hopefully be completed within the year.