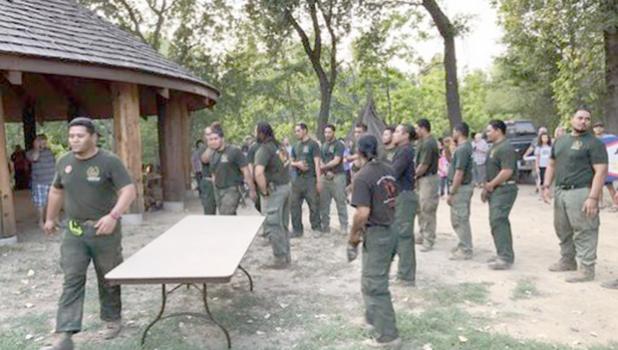 Redding, CALIFORNIA — Twenty-one firefighters from American Samoa and Hawai’i were welcomed with prayer, food, drumming, dancing and singing by North State Native Americans in a historic gathering on Tuesday night in Redding.

“When we first heard they were coming” to help fight the Carr Fire, “we wanted to reach out to them,” said Jack Potter Jr., Redding Rancheria tribal chairman. “It’s traditional protocol when you have guests in your land.”

Firefighters came straight from the fire lines when they got off duty at 7 p.m. Samoan firefighters stood and sang to the crowd.

“They sang a very special song they hardly sing outside of their area,” said Potter, who mentioned the meaning was very personal. Redding resident Dove Jude sang 'America the Beautiful' in her native language, Mono/Paiute.”

The Rancheria also threw a dinner for the firefighters, catered in part by Lim’s Café in Redding.

“Lim’s was the only restaurant that let our people in — back in the days when signs (on restaurants) said, ‘No dogs or Indians allowed,’” Potter said. “We never forgot that.”

Those gathered prayed to water, wind and fire spirits to restore balance in the North State.