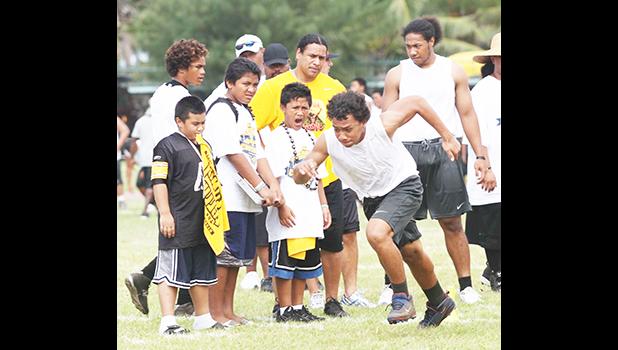 Pittsburgh, PA — You could argue Troy Polamalu landing in Pittsburgh and spending all 12 of his NFL seasons with the Steelers as a strong safety was a perfect fit. But as beloved as he was — and still is — in Pittsburgh, Polamalu’s legacy stretches far beyond Western Pennsylvania, even as he shies away from the spotlight before his induction into the Pro Football Hall of Fame on Aug. 7 (although Polamalu’s status is now in doubt after his announcement Friday that he tested positive for COVID-19).

It’s in American Samoa where Polamalu embraces the challenge of uplifting his people. Though he wasn’t born there, Polamalu will become just the second player of Samoan descent and third Polynesian to be enshrined in Canton, Ohio.

Polamalu took pride in representing his alma mater, Southern California, and his team, the Steelers, throughout his NFL career, but other than perhaps faith and family, nothing supersedes his culture.

Rob Ruck, who literally has written the book on football in the Polamalu family’s homeland, boils it all down to the ideology of fa’a Samoa.

“I love what it means to be Samoan,” Polamalu said in a 2015 NFL Films documentary, “to be self-sustaining, to really embody the warrior-ness of being Samoan.”

As Polamalu dons his gold jacket, he’ll take a brief step back into the spotlight, one he has often shirked since his retirement in 2015.

Next year, the Polamalus and filmmaker Adam Sjoberg hope to release a documentary 10 years in the making, “Songs of a Lost Island.” It will tell the story of Troy, but also focus on the significance of football in American Samoa and the uphill battle many of its inhabitants face each day, surrounding concussions in youth sports.