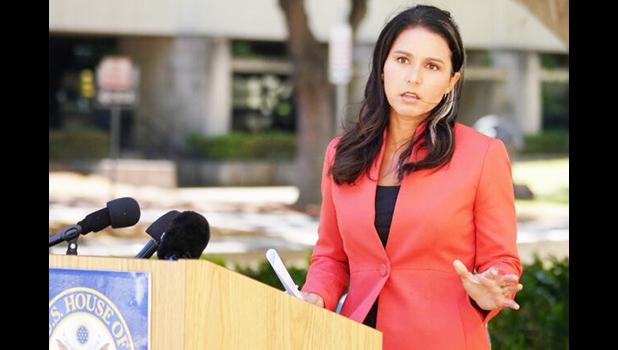 By
Daniel Newhauser
reprinted with permission from Honolulu Civil Beat

WASHINGTON — With her failed presidential bid in the rearview mirror, U.S. Rep. Tulsi Gabbard spun off her presidential fundraising committee into a new political action committee last week, a sign that she’s not done with politics, yet.

In short, Tulsi Now is no more; meet Tulsi Aloha.

Gabbard’s team filed paperwork with the Federal Election Commission on Sept. 4 to change her presidential campaign committee, Tulsi Now, into Tulsi Aloha, a leadership political action committee. The change means Gabbard can donate money left over from her presidential primary campaign to other candidates for local or national office.

That doesn’t mean Gabbard will be running for office again anytime soon, though. On the contrary, a leadership PAC is designated as a “nonconnected committee,” meaning it is legally unaffiliated from any Gabbard campaign. But it does signal that Gabbard plans to keep raising money and remain a player on the political stage, according to Brett Kappel, a D.C.-based campaign finance expert.

“It indicates that she plans to be politically active going forward,” he said. “If she just wanted to give away the remaining money in her campaign account she could have done that without converting it into a nonconnected committee.”

This kind of move is common for former candidates, and here’s why: A leadership PAC doesn’t have the same fundraising and donation restrictions as a campaign committee. Tulsi Now could only raise $2,800 from individuals for each election in which Gabbard was a candidate, including primary and general elections. Tulsi Aloha will be able to raise $5,000 per year from individuals, other PACs or political party committees regardless of whether or not Gabbard is running for office.

That’s important because Gabbard was recently warned by the FEC she was violating election rules by continuing to take in money after dropping out of the race in March, following a series of poor showings in primaries and caucuses around the country.

In April and May, the campaign emailed Gabbard supporters asking them to buy excess merchandise, such as shirts, stickers and hoodies, to help raise money for coronavirus relief efforts.

In June, FEC records show Gabbard donated about $4,400 to Direct Relief and the Semper Fi & America’s Fund, two nonprofits the campaign previously named as recipients of the donation drive proceeds. That same month, the FEC sent Gabbard’s campaign a letter notifying it that those fundraising efforts were not permitted because she had suspended her presidential campaign on March 19 and endorsed former Vice President Joe Biden.

“Primary election contributions made after the date of the announcement must be refunded,” the letter noted. “Please inform the Commission of your corrective action immediately in writing and provide photocopies of any refund checks.”

Erika Tsuji, Gabbard’s spokeswoman and treasurer of the new PAC, said her campaign is hard at work doing just that.

“All contributions collected after Congresswoman Tulsi Gabbard suspended her presidential campaign have either been returned to contributors or are being processed for return, in compliance with the FEC rules,” she said.

The new leadership PAC gives Gabbard a venue to solicit donations again with no fear of being dinged by the FEC. Since she also recently created a legal expense trust fund to pay off debt from a lawsuit against Hillary Clinton, Gabbard will have all the more money to donate to COVID-19 relief efforts or other political campaigns.

The leadership PAC structure also raises the limits on how much she can donate. Tulsi Now could only donate up to $2,000 per election to other campaigns or PACs. Now, she can donate up to $2,800, and that could float up to $5,000 per election if Tulsi Aloha meets the criteria for being a multicandidate PAC. It could qualify as a multicandidate PAC after it’s registered with the FEC for at least six months, donates to at least five federal candidates, and takes in at least 51 donations (including ones given during the presidential campaign). And if Gabbard ever does run for office again, the PAC could donate to her campaign, too.

This isn’t Gabbard’s first leadership PAC. The Time to Unite Lead and Serve With Integrity PAC — or TULSI PAC — operated between 2013 and 2018. During that time, TULSI PAC received tens of thousands of dollars, including from PACs affiliated with the defense contractors Raytheon and Lockheed Martin, the New York Life Insurance Company and the International Brotherhood of Electrical Workers.

In turn, the PAC made more than 100 donations to a range of Democrats, mostly running for the House of Representatives, but also to Reps. Beto O’Rourke and Kyrsten Sinema’s 2018 runs for Senate in Texas and Arizona, John Wisniewski’s 2017 gubernatorial bid in New Jersey and PACs and nonprofits associated with pro-choice causes.

Gabbard is hardly the first former presidential candidate to spin her candidate committee into a leadership PAC. For example, former Texas Gov. Rick Perry did the same thing after he dropped out of the 2012 GOP presidential primary.

Hawaii Sens. Brian Schatz and Mazie Hirono also have leadership PACs that have donated more than $400,000 to Democratic campaign committees across the country since Jan. 1, 2019.