Wellness Hub proposed for east side 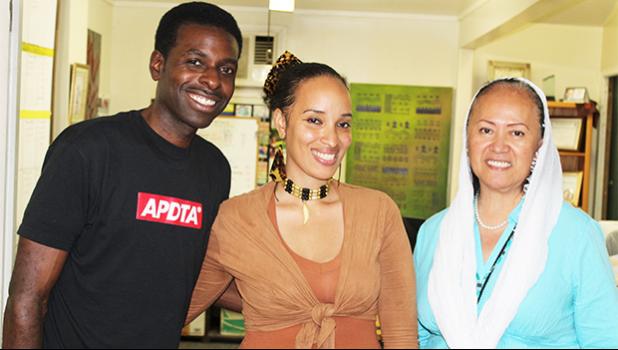 Samoan award wining film director, Queen Muhammad Ali, is looking at next year, to kick start the Social Wellness Hub on the east side of Tutuila, serving the entire community, with many local residents already embracing the project, which includes various art forms.

Ali was named as of one of the 70 finalists of the 2017 National Creative Placemaking Fund (NCPF), according to a June news release from Art- Place America, which identified her project for the community in Faga’itua as “Manuia Samoa”.

The proposal is a solar powered Social Wellness Hub dedicated to the health, nutrition, and creativity of the people on the beautiful, but health epidemic stricken islands of American Samoa. (See Samoa News June 12th edition for details.)

Ali, who is from the Le’iato family of Faga’itua, shared her project during an interview Tuesday with Samoa News, accompanied by her mother, Marie Olioli Leiato Tuiasosopo, and her husband, Hakeem Khaaliq.

While on island for more than a week, Ali met with the Faga’itua community including Faga’itua High School principal Suaese “Pooch” Ta’ase, the football team, and others who came to hear her Aug. 3rd presentation regarding the project.

“The reaction was so much love from the community,” Ali said. “They loved it and they can’t wait until we actually get into the development of it.”

When asked why she specifically chose Faga’itua, Ali said she wanted to set up something on the east side because there’s not much development there, compared to the bay area.

“I thought it would be good because Faga’itua High School is the only high school on the eastern side of Tutuila, to have another place where they can express themselves in art and also health and wellness,” she said.

“I thought it would be something they would love and they actually did love it and got great response from the community.”

There has been a lot of positive reaction from the community on the proposed project, as Ali spoke to students during a gathering at the Pago Pago Youth Center, as well as making rounds at the local radio stations.

When asked if she was surprised with the positive feed- back, Ali said, “I wasn’t surprised, but I was very happy. It was overwhelming, it was just beautiful.”

Ali said she is working on funding sources for the project, as well as more ways to get additional money, including grant opportunities.

“Because I’m not a millionaire, I can’t pay for all of it. But we’re putting a lot of our own money into this project.

Hopefully by January or February, we’ll be able to come back and start on the initial stages of development,” said Ali, who was on island four years ago and had visited Faga’itua HS students while conducting work on a film.

The “Manuia Samoa” project, according to her, is a social wellness hub, a place where “people can also express their art.”

Ali has also met some local traditional healers — or Samoan fofo — and wants to include them as part of the “Manuia Samoa” facility.

“We want to work with them to teach the art of natural healing. Also, there will be an art gallery for other artists such as painters,” she explained. “Really, the main focus is health and wellness.”

She pointed out that in the U.S “everyone is trying to go back to the natural way, instead of traditional western medicine. They want to find more ways to be healthy naturally — natural medicine, herbal healing, mas- sages. We want to focus on that at this facility too, and help teach it here.”

Samoa News observed during the interview that Ali was happy and very passionate in discussing her project, especially with her roots in American Samoa — her great uncle is Eteuati Leiato and her grand- mother is Masaniai Leiato.

“A lot of people have been very responsive and actually have been very helpful with this project,” Ali said, adding that she isn’t the only one involved in the project. “I work with the community, from the development and construction of the facility, to the operation. It is a community effort and community project.

I want to work with the people to build something not for myself, but for the entire community.”

When asked what she would consider a great achievement for her, as a woman, lm maker, and a person of Samoan ancestry working on this a project, Ali responded, “What I would like to see achieved, is the com- munity being able to express themselves artistically, not only through one medium of arts but all mediums, including health and wellness because I think it’ s important for us as Samoans to go back to the original way of not eating a lot of processed foods, not taking all these pills and things, but thinking about what we get from the land, that God gave us.”

She continued, “I want to make sure that a lot of the youth who are not accustomed to that, will learn to respect the fofo and a lot of the traditional medicine and arts.”

As to the actual site for the facility, Ali said it was proposed to be in Faga’itua but there is no confirmed location — for now — but it’s definitely going to be on the east side of Tutuila.