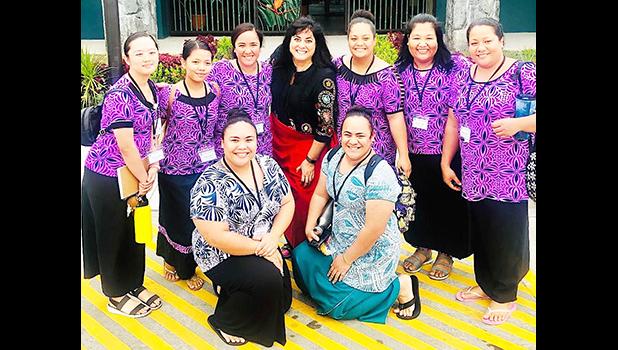 Pago Pago, AMERICAN SAMOA — On Wednesday, June 26th, over 80 local residents received a crash course in wound care, thanks to Nancy Morgan, a registered nurse who specializes in wound care and ostomy management, and also the co-founder of the Wound Care Education Institute (WCEI).

Being able to offer wound care training to American Samoa is remarkable news. But what was discovered during the process is an intriguing story with an ending that nobody expected.

His desire to improve the quality of patient care in wound care therapy and improve patient safety led him to seek assistance from LBJ’s Deputy Director of Human Resources, Malopao Dr. Akenese Nikolao in bringing the WCEI to American Samoa.

With the encouragement of LBJTMC Chief Executive Officer Faumuina Faumuina, Dr. Nikolao wrote the grant proposal on behalf of  the LBJ Medical Staff, Dr. Kamlesh Kumar, and the local office of the National Oceanic and Atmospheric Administration (NOAA) to assist with wound care and hyperbaric oxygen therapy for both sea divers and patients — many of whom are diabetic — who require this type of care.

Everything fell into place and the training became a reality last week. It was sponsored by LBJTMC, in partnership with the Pacific Youth & Community Development (PYCD) — Tausi Feagaiga Project via Hope House, and funded by a DOI/OIA TAP grant.

Continued Medical Education (CME) training for the LBJ medical staff - about 60 physicians and dentists - was held on Wednesday, June 26th, followed by the wound care training.

Nancy Morgan’s story is quite intriguing.

According to her, she was 18 years old when she found her biological mother, who didn’t tell her much about her father, except that he was a performer in Honolulu, HI

Morgan said her biological mother passed away a few years ago and as she searched through her things, she saw an old photo — a photo of someone she thought could be her father.

The ball started rolling this past Christmas when Morgan purchased an ancestry.com kit and sent it in.

On January 3rd, according to her, the results came in and they matched her to two of her first cousins.

“I contacted the first one, and explained to him that I was searching for my father,” Morgan recalled. “I sent him pictures that I found in my mother’s things.  Right away, he recognized one of the men in the photo, saying it was his uncle, Tama Leao.”

Morgan said she wanted to know the best way to approach the situation, as she didn’t just want to show up at this man’s doorstep unannounced. Her first cousin was kind enough to call his uncle directly, to break the news to him, that he has a daughter!

Morgan was later able to call her biological father and the two spoke. A month later, she traveled to Fort Lauderdale, Florida to meet him in person.

“I was thrilled. And every day I have been learning more and more about the culture. A part of me is trying to make up for lost time,” she continued.

In the same month, Morgan said she received an email inquiring about wound care education for nurses and doctors at the LBJ Medical Center.

“I felt that the email came at the right time, and it was powered by divine intervention,” Morgan shared. “I had just found out I am Samoan, and I get an email from American Samoa!”

She continued, “I told myself I had to do this. I wanted to learn the culture and help the people here, as they are my family now.”

Morgan is scheduled to depart the territory tonight. In addition to wound care training, she has been at LBJ working with the staff. She is here with her biological father, “and he is acquainting me with the island, the culture, and family,” Morgan said, adding that she plans to come back on a more regular basis, “to continue to help the people of American Samoa.”

“Everybody I have met on the island has provided me with an over abundance of love, acceptance. and kindness. This has been such a blessing to me, it has changed my life. I was raised as an only child and now I have this wonderful Samoan family and nation I am proud to be part of!”

She concluded, “I am so thrilled I found out who I am, as I’ve always had this missing piece in my life, and now it’s complete.”

The WCEI provides onsite and online courses in skin, wound, diabetic wound, and ostomy management. According to their brochure, WCEI courses are based on current standards of care and evidence-based research, and they are designed for people who are passionate about wound care, want to be legally defensible at bedside, and are preparing for their National Alliance of Wound Care and Ostomy (NAWCO) Board exams.

NAWCO makes up the largest and fastest growing group of certified wound care and ostomy professionals in the United States.