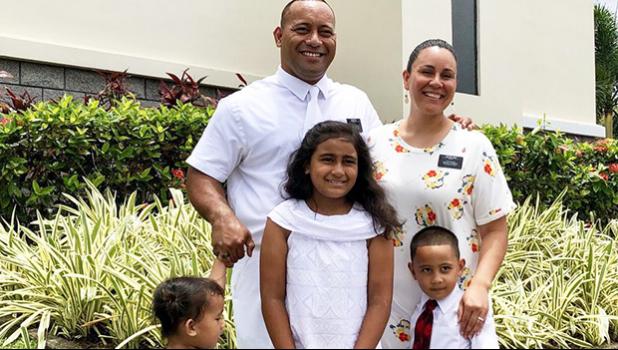 Pago Pago, AMERICA SAMOA — Alema Seu and Lorena Seu both graduated from BYU Idaho and were deciding what to do next.  Alema obtained a degree in Health Sciences, and Lorena in Early Childhood Special Education.  To help them choose where to go, the young couple decided to fast and pray to the Lord for guidance.  The evening of their fast Lorena had a very vivid dream that she was in American Samoa and while there, felt an immense amount of joy as if her heart were to burst.  Lorena felt a strong connection to the beautiful island and when she woke from her dream she turned to her husband and said “I think we are supposed to move to American Samoa.”

Although Lorena had never visited American Samoa, her maternal grandparents were born and and raised there.   Alema grew up in American Samoa.  Each of them had served missions for The Church of Jesus Christ of Latter-day Saints; he in Oakland, California and she in Cleveland, Ohio.

Alema applied and was accepted to work for the US Environmental Protection Agency in American Samoa.  His college degree and past experience qualified him for that job.

Alema’s grandfather had passed away in the year 2000 and left a home in American Samoa.  Alema was able to inherit that home and he and Lorena decided to remodel it for their family of five’s needs.  As a young boy, Alema would work alongside his grandfather who taught him carpentry skills.  Those skills came in handy for Alema as he would remodel much of the home himself.

The Seu's have dedicated their lives to serving others in the church, family, work and community.

During the day Alema works for the Environmental Protection agency doing a variety of functions including ensuring good air quality on island.   Alema and Lorena also spend a few evenings a week tutoring high school students in their village.

Both Alema and Lorena serve as officers for the BYU Alumni American Samoa Chapter. This chapter includes alumni on island from all BYU schools. For the past three years the American Samoa Chapter has partnered with the local public library to organize a summer reading program. The summer of 2019 was their largest enrollment yet with nearly 250 students ages 5 to 12. Lorena had the opportunity to create curriculum that promoted literacy for the younger aged children.

The Seu's have been called as Multi-Stake Coordinators for BYU Pathway Worldwide in American Samoa.  Pathways Worldwide allows students to take college courses online through the Church's BYU Idaho campus.   They are set apart as part time service missionaries and oversee the program for all of American Samoa.  They work with other missionaries who are set apart in their respective stakes, and together they help the students in this program.  They are a strong influence to the students in encouraging them to continue their education. .

On Saturday, October 12th Alema baptized his daughter Emma in front of a large gathering of family and friends.

In December Both Alema and Lorena joined with other members of the BYU Alumni Association to serve the employees of the American Samoa Department of Health.  Breakfast and dinner were provided to those who were working long hours, responding to the measles outbreak in American Samoa.