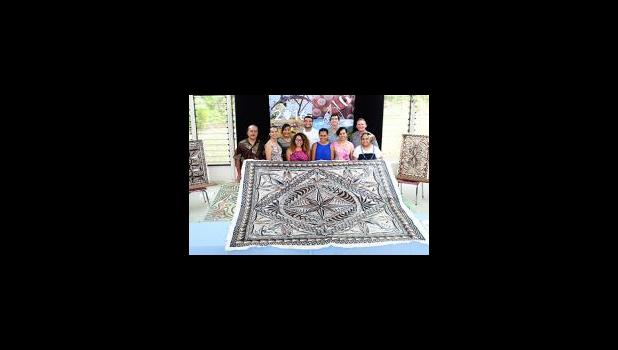 On April 7, as part of a collaborative project with the National Park of American Samoa, the American Samoa Community College (ASCC) Art Department unveiled a new eight foot by eight foot Siapo Mamanu, the largest siapo in this style to be created since 2000.

“This Siapo Mamanu will become a permanent part of our visitor center,” explained national park Chief of Interpretation and Education Michael Larson. “This will allow local and off-island visitors the opportunity to not only enjoy it, but also to learn about its importance in the Samoan culture as well as the incredible effort and creative process that went into making it.”

Under the direction of Reggie Meredith-Fitiao and Master Practitioner Su’a Fitiao Tupuola Wilson, students in the Indigenous Arts Forms (ART 161) class learned about and created a Siapo Mamanu.

The traditional methods used to make the siapo included the layering and adhering of the lau u’a (sheet of bark), collection and making of the natural dyes, and the applying of the Samoan mamanu symbols and patterns by painting in the freehand style using a paogo (pandanus key).

Siapo making is one of three Samoan traditional practices taught in ART 161through this partnership, along with fine mat weaving and woodcarving.

“Working with the national park on this project has been positive from the beginning,” said Meredith Fitiao. “Students in ART 161 have been immersed in traditional practices and ancestral methods of creating art, which I believe has been very meaningful to them as recipients of the knowledge, and also to those of us who have the privilege to share it. The national park’s vision to see the importance of our material culture and the passing on of this knowledge to our young artists is a key component to the project,and we are very grateful.”

Meredith-Fitiao recalled that the last Siapo Mamanu of a comparable size was created in 2000 by a team that included Marilyn Pritchard Walker and Adeline Pritchard Jones, daughters of master siapo maker Mary Jewett Pritchard. “Auntie Mary and her daughters have passed on,” she said, “but my husband Su’a and I were both students of Auntie Mary, and we’re proud to trace the lineage of this work back to her.”

“We are very excited to partner with ASCC to share these important traditional practices,” added Larson. “One of the reasons the National Park of American Samoa was established is to preserve, protect, and perpetuate the Samoan culture, and to ensure that Samoan cultural traditions don't become practices of the past, but will continue through teaching, especially to the youth.”