“Fuge” research in progress now — as a mosquito repellant 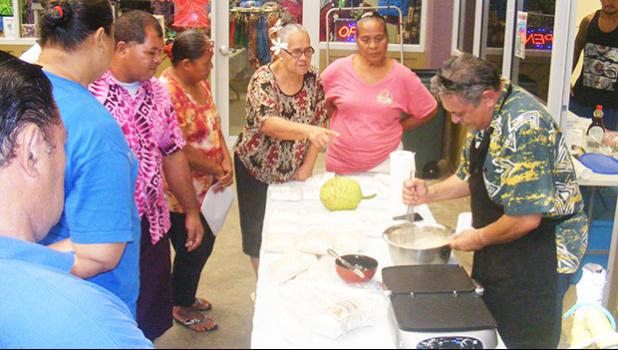 Rep. Su’a Alexander Eli Jennings and customers who showed up at his display table last week at the Fagatogo Market Place to check on gluten free breadfruit flour and two dried breadfruit that can be used to make hash brown.

These ladies were some of the several residents who had a chance to taste pancakes made from gluten free breadfruit flour during a demonstration by Rep. Su’a Alexander Eli Jennings at the Fagatogo Market Place.

Rep. Su’a Alexander Eli Jennings has started testing a new breadfruit product that can be used as a mosquito repellant, and its success means more attention focused on American Samoa to provide more products made from breadfruit and possibly new jobs for the local workforce.

The Swains Island Delegate has a small mill operation producing gluten free breadfruit flour using a retrofitted freight container dehydrator prototype. And Su’a has been working for more than two years with off island experts, such as Dr. Fadi Aramouni, Professor of Food Science and Extension Specialist with the Food Science Institute at Kansas State University.

“Now I’ve been asked to work on another product, which will come from breadfruit, and that is the ‘fuge’,” the long seed at the core of the breadfruit, Su’a said in a Samoa News interview last Friday at the Fagatogo Market Place, which markets the uses of gluten free breadfruit flour, including a demonstration of pancake making using the ulu flour.

“In working with Papali’i and other experts, they have associates who are very interested in the fuge, which has to fall from the breadfruit tree to be used… to be dried and then sent to researchers,” Su’a said. “They make DEET out of the it, the DEET in the mosquito repellant.”

“I’ve heard throughout the course of time and discussions that the fuge, people know, if you burn it, drives away mosquitoes,” he said. “So now I’m moving forward with this request on the fuge of the breadfruit.”

“While the fuge falls to the ground, people throw it away, but they make excellent mosquito repellant - the DEET,” he said. “Please don’t throw away fuge that falls from the tree, call me up and I’ll come clean your yard and collect the fuge, which will be another great product from American Samoa.”

Su’a explains that the DEET is a chemical in the mosquito repellent but “that’s a natural in the fuge.”

Asked as to when he will officially kick off the “fuge project,” Su’a said, “as soon as I can get some. I’ve already dried some and sent them off for research and they want more. So I’ll be drying fuge for the researcher.

“And there’s so many other things that the researchers want to do, and I think, the fuge is even worth more than breadfruit,” he said.

Su’a again encourages farmers and non-farmers with breadfruit that they don’t use to share it with his operation. “And don’t forget the fuge — at the time it falls from the tree — it is something I can also use,” and noted that there is also another product that can be made from the ulu, but opted to discuss that matter sometime in the future as soon as things are set to move forward.

A Nov. 15, 2013 published by US Department of Agriculture's Agricultural Research Service (ARS) says breadfruit, is used as a folk remedy in Pacific regions to control mosquitoes and is an effective mosquito repellent.

Additionally, ARS scientists and their collaborates at the University of British Columbia in Canada, identified three breadfruit compounds — capric, undecanoic and lauric acids — that act as insect repellents.

Capric, undecanoic and lauric acids, which are saturated fatty acids, were found to be significantly more effective at repelling mosquitoes than DEET, the primary insect repellent used against biting insects. ARS is the chief intramural scientific research agency of USDA. Details of the story on: www.ars.usda.gov