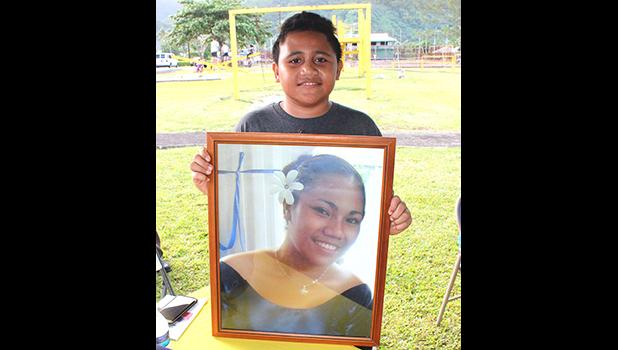 This is the last year of ceremony held by Rotary & Hawaiian Air announced
By
Fili Sagapolutele
fili@samoanews.com

Pago Pago, AMERICAN SAMOA — “In Loving Memory of Those We Lost: A September to Remember- Tsunami of 2009” was the theme of the government sponsored 10th anniversary memorial service of the 2009 tsunami last Saturday morning at the Veterans Memorial Center malae, where more than 300 mourners gathered to remember the 34 people in American Samoa who perished during the territory’s worst natural disaster.

The last public memorial service was held after 5p.m yesterday, hosted annually by the Leone village council at the Leone Healing Garden,

Some of the family members of the 34 victims of the Sept. 29, 2009 tsunami, during the singing of the national anthem at the government organized 10th anniversary of the tragedy, at the Veterans Memorial Monument in Tafuna last Saturday. [photo: FS]

Eight of the 34 local victims were citizens of Samoa residing in the territory.

Lolo delivered his brief remarks in Samoan, focusing on “preparedness”, saying the lives lost on that day 10 years ago will never be forgotten and the tsunami reminds the community to always be prepared for the unexpected. He said it’s not a day of sadness — although there is still hurt in our hearts, due to the loss of loved ones.

Assisted by his security officer, Gov. Lolo Matalasi Moliga is pictured during the laying of the wreath during the government organized 10th anniversary of the September 29, 2009 tsunami at the Veterans Memorial Monument at Tafuna Industrial Park last Saturday.  [photo: FS]

He expressed appreciation to all “first responders” and noted that last week, American Samoa focused on “preparedness” and he urged all to continue to do so. (See Samoa News Sept. 27th edition for the complete text of the governor’s tsunami memorial message.)

Part of the ceremony included a 21-gun salute by police, playing of the Taps by Tofaefono Dr. Victor Williams, and the governor laying the wreath at the Veterans Memorial Monument.

Tafuna High School JROTC cadets during the presentation of flags. DPS officers (in the back) prepared the 21-gun salute during the government organized 10th anniversary of the September 29, 2009 tsunami at the Veterans Memorial Monument at Tafuna Industrial Park last Saturday.  [photo: FS]

Family members of the 34 tsunami victims attended the service. Thirty-four decorated empty chairs were placed at the base of the Monument. And with soft music in the background, a female voice provided an explanation of the significance of the 34 empty chairs.

“Remember the chairs in front of you are empty, they’re unable to be with us today … the red rose, laid on each chair, reminds us of the life of each of our loved ones. [T]he yellow ribbon tied to the back of each empty chair is the symbol of our continued determination to account for the missing,” she said.

Names of the tsunami victims were called one by one, followed by a toll of the bell.

A family member placing the photo of her relative on the steps of the Veterans Memorial Monument at Tafuna Industrial Park last Saturday, during the government organized 10th anniversary of the September 29, 2009 tsunami. ASG staffers assisted families with the placement of the portraits of their deceased loved ones. [photo: FS]

The 34th victim was an elementary school student from Leone, Columbus Sauiluma, whose remains were never found, according to the program’s emcee, the governor’s Chief of Staff, Fiu Johnny Saelua.

Some family members brought large portraits of their loved ones that were displayed on stage at the base of the Monument.

The names of the tsunami victims were also recited during the Rotary Club and Hawaiian Air’s memorial service, and family members, who were in attendance, stood up when the name of their loved one was announced.

Among those who stood up, was First Lady Mrs. Moliga, who told the gathering that it was “my niece and her 5-year-old daughter”. A moment of silence was observed after all the names were read by Rotarian, Rep. Sam Meleisea.

Rotary president Peter Tinitali addressed the crowd of about 100 mourners, saying the 2009 tsunami “caused pain and destruction” and “we will always remember our families, relatives, friends, and spouses” who died that day. “… People’s lives changed that day. We experienced fear, anxiety, and sadness from the loss of lives and properties,” he said.

“The memories of your loved ones will forever be the beacon of hope in our lives. We will never forget you,” he told the audience. “But rest assured that our loved ones’ lives were not taken in vain. Their lives have made the government take decisive steps to assure assistance is ready and our people and community’s rights are protected when disaster strikes,” he said.

He then revealed that this is the final year for this ceremony, but the Rotary Club of Pago Pago and Hawaiian Air, “Tsunami Memorial Picnic Shelter” at Lions Park “will always be a testimony for those who lost their lives 10 years ago. We will never forget you.”

Among the victims of the Sept. 29, 2009 tsunami was 63-year-old Fa’aumaolagi So’oalo-Mua, shown in the portrait held by her family at last Saturday’s memorial service organized by the Rotary Club of Pago Pago and Hawaiian Airlines at Lions Park. [photo: FS]

Hawaiian Air was represented by local supervisor, Mariana Faiai who noted that darkness fell on American Samoa following the 2009 tsunami.

She urged preparedness in the community moving forward. “Today, as we remember our loved ones who perished in the tragedy of 2009, let us continue to pray for their families, that they find peace and solace and strength to overcome the painful loss,” she said. “And may we all resume our journey forward with hope and determination as individuals, families, and as a community.

Mrs. Moliga delivered the keynote address and said that not only was the annual service to remember the victims, but “we are also here today to provide ongoing support and encouragement to family members and friends. And also to participate as a community.”

The First Lady has been a long time supporter of the annual ceremony and she remembered with appreciation the late ASPA executive director Utu Abe Malae, who was also a Rotarian.

Two slots were given to family members of the victims to speak during the ceremony. One of the speakers was Edwina L. Tanielu, whose father Pita Tanielu was a bus driver. “I was an 8th grader when the tsunami happened. And so from 2009 until this day, life hasn’t been the same. It wasn’t easy to grow up living without a father to provide for our family,” she said.

“But we’ve made it this far. We’ve only done it because we were dependent on God to help us, to lead us, and guide us throughout these 10 years,” she continued, adding that “this is the only time I talk about my father, because it’s a very sensitive topic. Every time someone mentions it, I try to change the subject because I don’t want to talk about it.”

The second speaker was Fetuao So’oalo-Mua, who spoke briefly in Samoan. He said his mother Fa’aumaolagi So’oalo-Mua, 63, was among the 9 elderly members of the TAOA weaving program who were at a Leone facility when the tsunami hit. He said he and others were in Fagaalu at the time, not knowing what happened and it wasn’t until later that he learned his mother was among the victims.

Part of the annual memorial service program is the awarding of scholarships to students whose parents died in the tsunami. Samoa News will report later this week on this year’s recipients, awarded by One Global Family Foundation, headed by Laura Ava Tesimale.