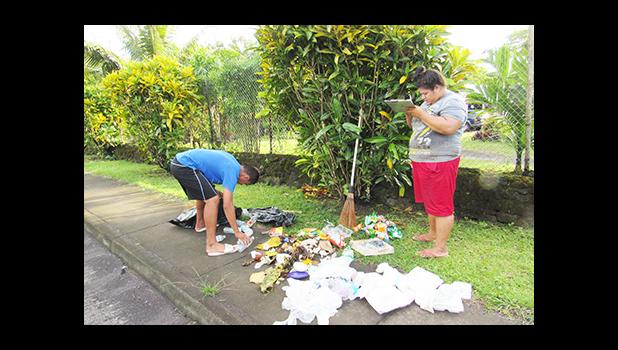 The AS-EPA KASB program has continued its efforts to clear roadsides, streams and beaches of littered trash. Of the 20 groups that are conducting monthly cleanups, 13 were able to submit data from April to June 2016 showing the types of trash collected from their adopted areas. The committed groups are listed below.

The data collected is very critical in identifying appropriate actions to take as an agency, as a community, to help reduce solid waste, promote the reuse of certain items and encourage recycling programs throughout the territory.

From April to June, 2016 the 13 groups removed an estimated total of 6,061 pounds of trash from roadsides, streams and coastal areas.

Here’s a look at the top 10 most littered items for this time period.

Many of the most commonly found pieces of trash include items we use every day from food wrappers to beverage containers to plastic bags. The passionate volunteers who participate in the KASB program each year don’t just pick up trash that endangers the health of humans, wildlife and coastal economies; they count every item as well and record them on forms that are submitted to AS-EPA to consolidate and generate a report from.

AS-EPA Director Ameko Pato encourages the community, businesses and government departments to unite in the fight against littering and bring back the village pride in cleanliness that was evident in the past. “Getting each village to take charge and ownership of cleaning up their respective jurisdictions is the key to Keeping American Samoa Beautiful for generations to come” said Director Pato.

American Samoa, the beauty and well being of our island rests in your hands. Please think twice before you toss that trash on the ground. Do your part, and join the movement to Keep American Samoa Beautiful.