$2.3 M CARES Act money to be used for partial funding of new courthouse 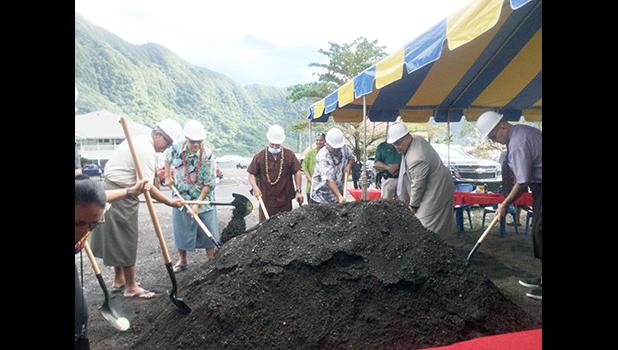 Pago Pago, AMERICAN SAMOA — Gov. Lolo Matalasi Moliga was joined yesterday morning by Chief Associate Judge Mamea Sala Jr., and others for the ground breaking of the proposed new two-story court —  with an estimated cost of up to $7 million — at the former site of the old Communications building in Fagatogo.

In his remarks at the ceremony, delivered in Samoan, the governor apologized to the Chief Justice for the government’s delayed response to the Judicial Branch request — made about two years ago — for a new court building.

Lolo explained that securing funds for the project was the first difficult issue for the government that needed to be addressed. And when ASG’s financial audits showed surplus for fiscal years 2017 and 2018, Lolo said it was thought at the time, that this would be the best funding source.

However, he said it was insufficient, based on what’s needed for the project, therefore surpluses for FYs 2017 and 2018 were allocated to other ASG projects — including the new security fence for the Territorial Correctional Facility.

The governor further explained that ASG’s surplus forecast for fiscal years 2019 and 2020 is about $17 million; and that a majority of this surplus will go towards completing the proposed two-story Fono building, which is under construction.

(As previously reported by Samoa News, the Fono leaders had stated that additional funding is needed for offices for lawmakers as current funding for the project is only for the construction of the structure itself.)

Lolo said that neither of the two projects — the new court house building or the new Fono building — qualifies to receive any federal funding so the Administration focused on local money as funding sources.

However, the COVID-19 pandemic surfaced and it brought  $35 million in federal funds allocated to American Samoa, according to the governor, who noted that $2.3 million of this money is allocated for the new court house building.

Another funding source is the $700,000 earmarked under the Governor’s Special Program for FY 2021 and the final source of funding is any left over surplus money from FYs 2019 and 2020.

Lolo estimates that the new court house building project will come in at $7 million, saying that this is taking into account any future changes that may be requested by the Judicial Branch. He said the blueprint for the project was drawn up by the Department of Public Works and this is the first time that he has not complained about blueprints by DPW.

He also pointed out the project is currently being handled by the Department of Public Works and hopefully in the near future, will be turned over to a main contractor for the actual construction phase.

According to the governor, this multi-million dollar project was not immediately awarded to a main contractor as many of the firms on island are faced with labor storages and are trying to recruit workers from Samoa, but it has been difficult due to the current pandemic.

Public Works director Faleosina Voigt provided a brief explanation of the project — which she says is estimated to have a total cost between $5 million and $7 million. The new proposed two-story court building includes three court rooms, three jury rooms; and offices for the Chief Justice and Associate Judges.

Among them is that the new building must be “built on stilts” to satisfy US Federal Emergency Management Agency (FEMA) requirements; comply with the federal American with Disabilities Act (ADA) law for which the building must have elevators and ramps; and must be fire-code compliant with fire sprinklers and a fire alarm system.

She explained the three-phases of construction, with the first phase, which is the demolition of the old Communications building, which is already completed; followed by the second phase, and that is the laying of the building’s foundation.