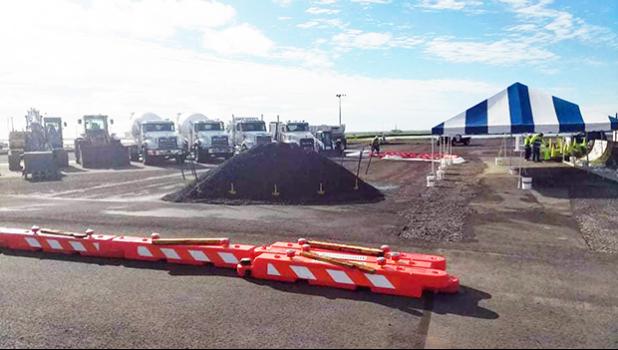 Pago Pago, AMERICAN SAMOA — Ground breaking was held this past Wednesday, Sept. 23, for stages 2 to 6 of the Rehabilitation of the Pago Pago International Airport Terminal Apron. Airport officials told the cabinet meeting at the airport conference room before the ground breaking ceremony that one of airport’s biggest projects is the Apron rehab project.

The project information-sheet provided states that the existing apron pavement is over 40 years old, and has significant cracking and loose material which are safety hazards to operating aircraft.

The design for the Apron Rehabilitation was completed in 2017 by Beca Group and the construction was phased in stages — with stage one completed early this year by McConnel Dowell at the total cost of $11 million.

The remaining stages 2 to 6 were awarded recently to Paramount Builders Inc., and completion date is slated for December 2021. Total funding for these stages is more than $28.8 million — with funding sources from the US Federal Aviation Administration and ASG, according to the ground breaking program.

Stages 2 to 6 include construction of two new concrete aircraft hardstands and the associated fuel hydrants and storm water drainage for each stand. The project also includes the rehabilitation of the asphalt pavement in the Apron area, new airfield edge lighting and pavement expansion to allow efficient and safer aircraft operations at Pago Pago International Airport, according to the project description.