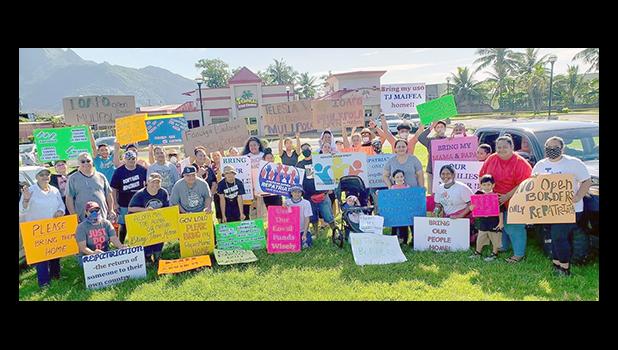 Pago Pago, AMERICAN SAMOA — The Tagata Tutu Faatasi Alliance of American Samoa sent a letter to Congresswoman Aumua Amata last week explaining their plight — that they are residents of American Samoa stranded off-island in “dire financial need” as they wait for a repatriation flight.

TTFAAS told Samoa News, “In our letter, the Alliance asked the Congresswoman on her stance regarding the Repatriation issue as she has been silent since her last reply back in June, right before she advocated for the return of one soldier for his mother’s death, in which she told the Alliance that she has no power within American Samoa, and it’s law.”

In their letter to the Congresswoman, they point out, “Our situation grows despondent in large degrees day by day. Many of our stranded people have reported precipitous declines in their financial assets. We need robust support from our American Samoa Government and Congressional Liaison.”

The Alliance points to $80 million “from the Medicaid funds [for which] ASG might not be able to get a matching fund, that may have to be returned to the Federal Government. We are therefore, requesting to re-appropriate $3- $5 million of those funds to assist with the plight of the stranded residents. This will cover the cost of basic needs along with temporary living arrangements. The overwhelming burden our people face of being separated from their families, in addition to battling some form of mental illness becomes severe with time.”

The Alliance also calls upon the Congresswoman, as her constituents, “to inform us in a forthright manner if you stand with the stranded residents, their families and supporters to repatriate or does your silence on this issue indicate otherwise — that you are not for repatriation!”

According to Congresswoman Amata, responding to Samoa News’ request for a comment to the Alliance’s letter on Wednesday morning, “The coronavirus pandemic from China has interrupted lives in so many ways, including American Samoa and really the entire United States and world.

“Many of our people urgently desire to be repatriated, some for major needs, others to simply come home or see family. I truly understand the importance of all of these, and I recognize the Territory’s travel rules are causing economic hardship for those unable to leave the higher cost Hawaii or California.

“I join your prayers for a speedy outcome or a medical breakthrough, along with wisdom for the Governor and task force here, and U.S. leaders at every level including the CDC,” she said.

Congresswoman Amata continued in her statement to Samoa News that “the CARES Act recovery funding levels are truly historic for American Samoa from Congress, however, once Congress allocates these funds, the control and dispersal, along with the decision-making for our border and immigration, do rest solely and fully on the Governor and ASG.”

She noted that “over these many weeks, I’ve had the opportunity to hear directly from many about family members away, and others contact me from the states, and I am deeply moved and concerned.

“I can inform you [Samoa News] that I recently responded to the U.S. Senate and requested additional funds for our annual local government operations budget, and asked for additional flexibility on the use of those funds by ASG for emergency repatriation costs.

“I will keep you informed, and encourage people to share your needs with leaders on our islands at every level, including the Governor, ASG, Fono, and your village and family chiefly titles. This is so that our islands can come to consensus and move forward together in unity to help and protect all of our people,” Congresswoman Amata concluded.

There is no specific mention in Amata’s comment of the Medicaid money that the Alliance is hoping to re-direct or re-appropriate for repatriation purposes. In her reply to Samoa News’s request for clarification she notes that “whether it's to an agency or to Congress, if the Governor wants to use it  (funding) for repatriation or other purposes, he makes the request. It has been dedicated for LBJ but the request needs to come from the Governor of the State or Territory.”

Samoa News also points out that American Samoa controls its own borders — which is why the territory has its own Immigration and Customs Offices, separate from the U.S.

Samoa News asked the Alliance for a response to Gov. Lolo Matalasi Moliga’s latest ‘no answer’ about a possible repatriation flight — despite his praising ASG’s first responders as well as other ASG agencies, who participated in the ‘full blown’ repatriation exercise held last week Thursday at Pago Pago International Airport.

Of their actions, he noted the exercise manifested “bold and effective leadership” as well as comprising “unity and fluidity in the performance of assigned duties and responsibilities.”

Samoa News reported on Tuesday that the governor, in a Sept. 25th memo to Police Commissioner Le’i Sonny Thompson, Port Administration director Taimalelagi Dr. Claire Poumele and Health director Motusa Tuileama Nua, informed cabinet members that it’s the administration’s “collective pledge” that no action will be taken on a repatriation flight for stranded local residents “until we are absolutely sure” that the actions taken will “prevent the entry of the virus into our home.”

The governor wrote, “It is without a doubt that all our people — including those stranded outside thoroughly appreciate” the dedication of the people who participated in the full blown exercise.

He made no mention in the memo as to when he will make a decision on a repatriation flight for American Samoa residents stranded in the U.S.

The Alliance responded on Tuesday night that “the impunity with what the Governor stated, shows a gross lack of forbearance on his part. To still hide behind a facade of plenty of protection for the people, he continues to spill out falsehoods for all concerned.

“All around, the Pacific Island leaders including New Zealand and Australia have shown us that It can be and has been done. Yet the disregard for not only the TTFAAS and the dying patients for off-island referrals is unacceptable.

“Your words and actions, and all those that support you on this immoral stance, will be judged henceforth.

“In the end, the truth will prevail,” the Alliance stated.

Yesterday in a House Heath Committee hearing, Dr Iotamo Saleapaga — the Chief Medical Officer at LBJ Hospital and also a Coronavirus Task Force member — told Representatives that there are no plans at this stage for repatriation flights. (See separate story in this issue.)