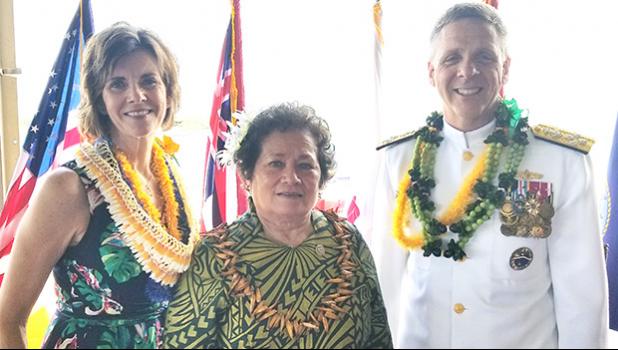 Washington, D.C. — Wednesday, at the invitation of the Secretary of Defense, Congresswoman Aumua Amata attended the Change of Command Ceremony for the U.S. Indo-Pacific Command (PACOM), at which Admiral Phillip S. Davidson formally relieved Admiral Harry Harris and became the 25th PACOM Commander.  U.S. Secretary of Defense James Mattis presided over the May 30 ceremony on Joint Base Pearl Harbor Hickam, Hawai’i.

“Congratulations to Admiral Davidson as he takes on this immense responsibility to safeguard the massive Pacific Ocean and all the widespread areas of this command,” said Amata. “The U.S. Indo-Pacific Command’s area of oversight includes vigilance covering half of the earth’s surface, and our own American Samoa is right in the middle of this vast region. Thank you to both Admiral Harris and Admiral Davidson for decades of service to our country.”

Admiral Harris is the first Asian American to rise to the rank of Admiral in the U.S. Navy, and until his retirement this past week, was the highest-ranking Japanese-American serving in the U.S. military. Upon his retirement from the Navy, he is President Trump’s nominee to serve as U.S. Ambassador to South Korea.

“Both of these Admirals graduated from the U.S. Naval Academy, and every time I nominate one of our own students to any of our nation’s distinguished service academies, I’m aware that decades from now any one of them could be assuming significant roles like this in our future national defense,” continued Congresswoman Amata. “It’s always humbling attending these military events because of how much the service of all these men and women in uniform means to this great country, and it’s special to be a part of a Territory in which so many of our people are serving or have served.”