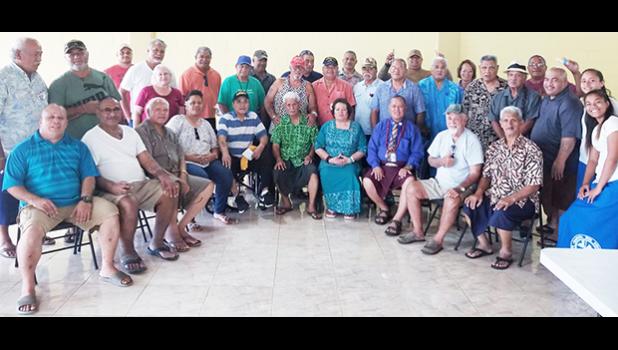 Washington, D.C. — On Thursday Congresswoman Aumua Amata  took part in a vote and mark up of bills in the House Veterans’ Affairs Committee (HVAC). She highlighted four Veterans’ bills she recently cosponsored, including two passed Thursday by the Committee.

“These bills support our Veterans in several ways,” said Aumua Amata. “These include a job skills program, innovative mental health efforts, the overall mission of the VA, and an expansion of who qualifies as a Vietnam Veteran. We have a national commitment to our Veterans.”

HVAC passed H.R. 3010, the Honoring All Veterans Act. This bill would establish VA’s mission statement as: "To fulfill President Lincoln's promise to care for those 'who shall have borne the battle' and for their families, caregivers, and survivors." Under the bill, VA would publish a notification explaining the mission statement on VA’s website and on the Federal Register and update all electronic references to the mission throughout the Department, and report back to Congress.

HVAC passed H.R. 7111 — To direct the Secretary of Veterans Affairs to carry out a retraining assistance program for unemployed veterans, and for other purposes. This bill would:

•    Expand the eligible providers for the High Technology Programs of Education for Veterans, known as the “VET Tec” Program.

•    Boost Vet Tec’s budget due to overwhelming demand for the program enrollment.

•    Expand a pilot program allowing veterans and their spouses to attend the employment portion of the Transition Assistance Program (TAP) outside of military installations.

•    Provide grant funding to community programs that provide critical transitional services to Veterans separated, retired, or discharged from service and their spouses.

Last week, on July 23, Congresswoman Amata also took part in a full Committee hearing examining and discussing a series of Veterans’ bills, including these which she cosponsored.

H.R. 2435 - Accelerating Veterans Recovery Outdoors Act. This bill would instruct VA to establish a one-year Task Force on Outdoor Recreation for Veterans to report and make recommendations on the use of public lands or other outdoor spaces for medical treatment and therapy for veterans. The Task Force would be co-chaired by VA and the Department of the Interior and include the Secretaries of the Departments of VA, the Interior, HHS, Agriculture, Defense, and Homeland Security as well as the Chief of the Army Corps of Engineers. A 2014 VA/University of Michigan study found that outdoor activities and long-term psychological well-being of veterans were linked, with benefits from taking part in 12 outdoor adventure options such as fishing, kayaking, backpacking, and whitewater rafting despite not including structured therapy components, and these benefits that lasted for days  after the activity. Dr. Jason Duvall, research scientist at the University of Michigan, stated that, "the findings suggest that extended group-based nature recreation can have significant positive impacts on veterans struggling with serious health problems.”

H.R. 6082 - Forgotten Vietnam Veterans Act. This bill expands the number of Veterans that qualify as having served in the Vietnam war effort by moving the start date for those benefits earlier, to Nov. 1, 1955.

In other recent HVAC activity, on July 22, Congresswoman Amata took part in a hearing of the HVAC Oversight and Investigation Subcommittee, in conjunction with the Women Veterans Task Force, to continue examining VA efforts to eliminate sexual harassment and assault. This hearing was titled “Safety for All: Ending Sexual Harassment in the Department of Veterans Affairs.” Members of Congress heard testimony on VA efforts and actions, and discussed the Government Accountability Office’s June 2020 report, “Sexual Harassment: Inconsistent and Incomplete Policies and Information Hinder VA’s Efforts to Protect Employees.”

“This is such an important issue for women working in the VA,” said Aumua Amata. “This GAO study, and the transparency through hearings like this one, can be building blocks for better workplaces.”