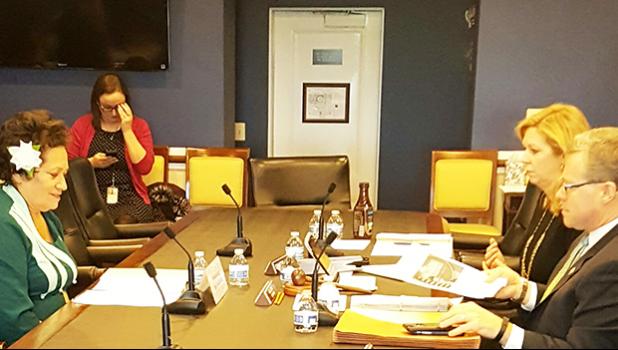 Washington, D.C. — Congresswoman Aumua Amata, testified before the Military Construction/ Veterans Affairs Appropriations Subcommittee in the U.S. Capitol building Thursday morning to speak on the needs and discrepancies in care for our veterans in American Samoa.

“I want to take this moment to talk a little bit about my home district of American Samoa, where we enlist into the United States armed forces at a rate higher than that of any other state or territory…something we are very proud of,” said Amata to the panel.  “Our high rate of enlistment means that we also have a high number of veterans who live in American Samoa. Currently, those veterans who need to receive VA medical treatment must fly to Hawaii to see their Doctor…which the VA foots the bill for, as well as their lodging costs for the week due to the limited number of flights a week to American Samoa.  Another reason our veterans must fly to Hawaii to receive VA services is because the only hospital in American Samoa is so run down and lacking in proper equipment and medical professionals, that the VA will not allow anything other than outpatient services for our local veterans to be done at the hospital.” continued the Congresswoman.

Amata continued her testimony stating, “Whether it be the construction of a new hospital that would serve the entire population, including our veterans, or simply renovating and adding on to the existing structure, I know that we can come up with a solution that will save the taxpayers a great deal of money in the long run, and also improve the level of care our veterans are receiving to bring it on par with those in the states and other territories.”

“I want to thank both Chairman Dent and Ranking Member Wasserman Schultz for holding this important hearing today, so that the subcommittee can hear directly from Members, the needs they foresee in their home districts.  I also want to thank all of the doctors, nurses, administrators, and the other staff at LBJ who do so much with so little; as well as the Governor and his administration for their efforts to keep LBJ up and running with the limited resources available to them.” concluded the Congresswoman.