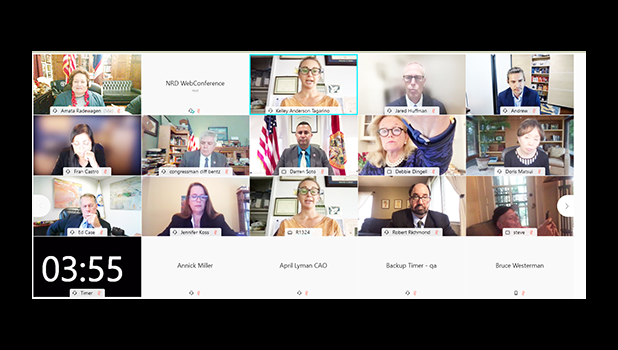 Congresswoman Amata is an original cosponsor of the bipartisan Restoring Resilient Reefs Act of 2021, H.R. 160, which Members of Congress examined in the hearing. Kelley Anderson Tagarino, University of Hawai’i Sea Grant extension agent based in American Samoa, testified on the importance and benefits of the legislation to coral reef preservation efforts, and the essential role of reefs in shoreline protection. Through her statement and responses to Congresswoman Amata’s questions, Anderson Tagarino highlighted the role of local autonomy, and explained the shoreline erosion and sinking issues that Tutuila is experiencing, as studied since the 2009 tsunami.

“Thank you to Kelley Anderson Tagarino for sharing her direct knowledge of these topics with Members of Congress, so we can move forward with the efforts of this bill,” said Congresswoman Amata. “Thank you also to Taotasi Archie Soliai, Director of the American Samoa Department of Marine and Wildlife Resources, for his letter to the Committee supporting the legislation, the new resources the bill provides, and its measures to improve local input and flexibility.”

“Our coral reefs are part of a healthy tropical island ecosystem,” Amata continued. “This legislation recognizes the importance of these reefs, which include some of the oldest and largest reefs in the world, and supports their preservation.”

In his letter, Director Soliai states, “American Samoa fully supports the Restoring Resilient Reefs Act of 2021, due to its innovative solutions to link science to on the ground management activities and increasing support for the federal and jurisdictional coral reef programs.”

Congresswoman Amata was one of five Members cosponsoring the bill upon introduction with Rep. Darren Soto (D-FL), and it now has 31 bipartisan cosponsors.