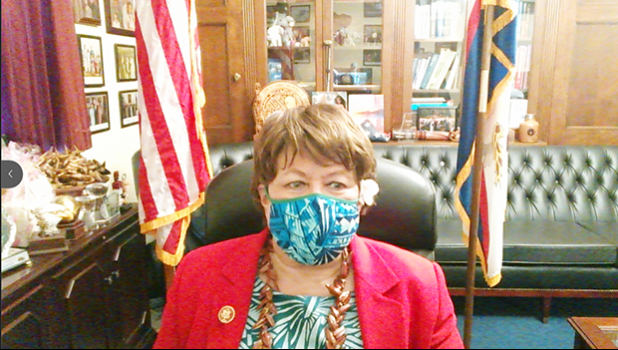 Washington, D.C. –— Congresswoman Uifa’atali Amata took part in the conclusion of voting Thursday in the House Committee on Natural Resources regarding a proposed $3.5 trillion budget reconciliation bill that will continue to be debated in Congress.

While aspects of the same legislation were being marked up in other committees of jurisdiction, the Natural Resources Committee finished up a slate of amendments. Among the measures related to the territories and the U.S. Department of the Interior, is an approximate $120 million to $140 million over the next ten years for American Samoa specifically for “hospital and other critical health care infrastructure.” This outcome would be dependent on 1) passage of another stimulus bill this year, and 2) the cost of any final bill that is acceptable to a majority of the U.S. Senate.

Among many sections of the bill covered in two full days of Committee votes, the House Natural Resources Committee included $1 billion ($993 million) through the Department of Interior Office of Insular Affairs for hospital infrastructure in four smaller U.S. territories, of which American Samoa’s portion is estimated around $120-140 million.

Thursday’s Committee action represents another step forward for the bill, although some key congressional leaders prefer that it be passed in a less costly version. For instance, Senator Joe Manchin of West Virginia, a key swing vote, is reluctant to spend $3.5 trillion and is seeking a substantially reduced total spending level to win his needed support for possible final passage.

“I will keep you as informed as possible on these potential local hospital funds, and will continue to make the future of our health infrastructure a top priority,” said Congresswoman Amata. “I appreciate the thoughtful concerns of Senator Manchin, Chairman of the Senate Energy and Natural Resources Committee, which has jurisdiction over the territories, along with others who will have lead roles in the possible outcomes. My message to them is that the territories’ hospital funding should be in any final bill, and that Governors should have better flexibility to use already appropriated funds in a prior stimulus, the American Rescue Plan, for long term priorities like hospital infrastructure.”