Amata releases statement on issue of children detained without parents 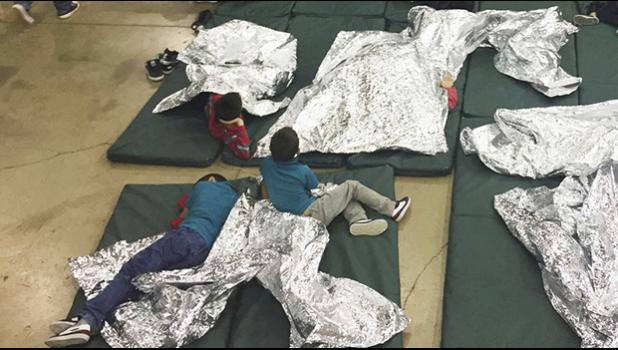 Washington, D.C. — Trump administration officials have been sending babies and other young children forcibly separated from their parents at the U.S.-Mexico border to at least three “tender age” shelters in South Texas, The Associated Press has learned.

Lawyers and medical providers who have visited the Rio Grande Valley shelters described play rooms of crying preschool-age children in crisis. The government also plans to open a fourth shelter to house hundreds of young migrant children in Houston, where city leaders denounced the move Tuesday.

Since the White House announced its zero tolerance policy in early May, more than 2,300 children have been taken from their parents at the U.S.-Mexico border, resulting in a new influx of young children requiring government care. The government has faced withering critiques over images of some of the children in cages inside U.S. Border Patrol processing stations.

The following is Amata’s response:

“Putting the best interests of the child first is mine and my colleagues guiding principle as Congress reviews the policy options in this immigration debate. Changes to our immigration processes should protect all families to the greatest extent practical.

“I’m encouraged by the efforts of my colleagues on both sides of the aisle proposing solutions to insure the safety and protection of all those impacted by our immigration laws and look forward to helping shape revisions over the coming weeks that will hopefully lead to positive substantive changes,” the Congresswoman said.

(Samoa News should point out that Congresswoman Aumua Amata is a registered member of the Republican Party.)

In the Senate, meanwhile, Republicans are rallying behind narrow legislation that would allow detained families to stay together while expediting their deportation proceedings.

Decades after the nation’s child welfare system ended the use of orphanages over concerns about the lasting trauma to children, the administration is standing up new institutions to hold Central American toddlers that the government separated from their parents.

“The thought that they are going to be putting such little kids in an institutional setting? I mean it is hard for me to even wrap my mind around it,” said Kay Bellor, vice president for programs at Lutheran Immigration and Refugee Service, which provides foster care and other child welfare services to migrant children. “Toddlers are being detained.”

Bellor said shelters follow strict procedures surrounding who can gain access to the children in order to protect their safety, but that means information about their welfare can be limited.

By law, child migrants traveling alone must be sent to facilities run by the U.S. Department of Health and Human Services within three days of being detained. The agency then is responsible for placing the children in shelters or foster homes until they are united with a relative or sponsor in the community as they await immigration court hearings.

The United Nations, some Democratic and Republican lawmakers and religious groups have sharply criticized the policy, calling it inhumane.

Not so, said Steven Wagner, an official with the Department of Health and Human Services.

“We have specialized facilities that are devoted to providing care to children with special needs and tender age children as we define as under 13 would fall into that category,” he said. “They’re not government facilities per se, and they have very well-trained clinicians, and those facilities meet state licensing standards for child welfare agencies, and they’re staffed by people who know how to deal with the needs — particularly of the younger children.”

Until now, however, it’s been unknown where they are.

During a press briefing Tuesday, reporters repeatedly asked for an age breakdown of the children who have been taken. Officials from both law enforcement and Health and Human Services said they didn’t how many children were under 5, under 2, or even so little they’re non-verbal.

“The facilities that they have for the most part are not licensed for tender age children,” said Michelle Brane, director of migrant rights at the Women’s Refugee Commission, who met with a 4-year-old girl in diapers in a McAllen warehouse where Border Patrol temporarily holds migrant families. “There is no model for how you house tons of little children in cots institutionally in our country. We don’t do orphanages, our child welfare has recognized that is an inappropriate setting for little children.”

So now, the government has to try to hire more caregivers.

(Associated Press contributed to this report)