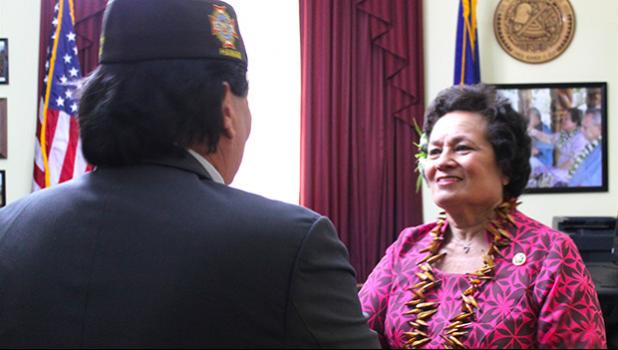 Secretary Wilkie was nominated by President Trump to serve as VA Secretary during the ongoing legislative and administrative reform efforts to the department, and the U.S. Senate confirmed his appointment late Monday by a bipartisan vote of 86-9.

“Secretary Wilkie has been serving as acting head of the Department since April, and he is thoroughly prepared with an extensive track record serving veterans,” said Aumua Amata. “I will continue making certain that the leadership of the VA understands the unique challenges of our veterans in American Samoa and throughout the Pacific. I’m confident he shares a strong commitment to our nation’s veterans, and he is committed to ongoing necessary reforms to VA services. I look forward to continuing to work with him through the House Committee on Veterans’ Affairs.”

Secretary Wilkie served in the U.S. Navy Reserve, and then as an officer in the U.S. Air Force Reserve. He graduated from the College of Naval Command and Staff, Air Command and Staff College, the United States Army War College, and the Joint Forces Staff College. He also holds an Honors degree from Wake Forest University; Juris Doctor from Loyola University College of Law in New Orleans; Master of Laws in International and Comparative Law from Georgetown University and a Master’s in Strategic Studies from the United States Army War College.

He has served in various Under Secretary and Assistant Secretary of Defense roles under Defense Secretaries Donald Rumsfeld and Robert Gates, advised Secretary Condoleeza Rice, and held past senior advisory roles to Senators Thom Tillis and then-Majority Leader Trent Lott.