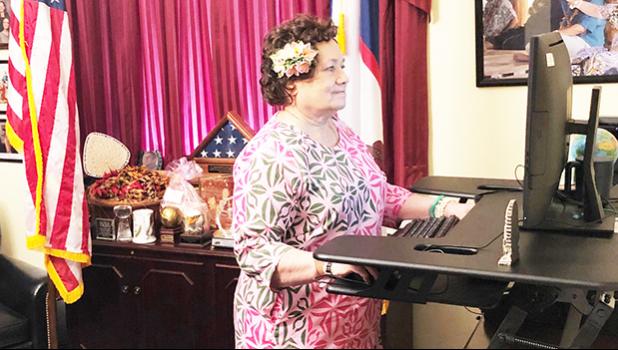 By
comnpiled by Samoa News staff
Source: Based on press release

Washington, D.C. — Congresswoman Uifa’atali Amata welcomed a response to her recent inquiries from the Centers for Medicare and Medicaid Services (CMS) announcing a $2.3 million boost in total available Medicaid funding in Fiscal Year (FY) 2022 (beginning October 1) from $85.5 to 87.8 million, which is up from FY 2021, based on a 2.7 percent increase under the formula as directed by Congress.

Congress is also working to ensure American Samoa’s match will remain in place during the period covered by the continuing resolution (CR) until our more permanent extension is passed by Congress, which is widely expected later this fall.

Starting with FY 2020, Congress boosted the standard federal match rate to 83% from the longstanding 55% previously, and due to Congress’s Covid response, the rate has been 89.3 percent.

Samoa News reported on this issue in yesterday’s edition (Sept. 27, 2021) about the Federal Medical Assistance Percentage (FMAP) or standard federal match rate, which according to the local Medicaid Director, Sandra King Young is actually 67% because of the type of eligibility American Samoa applies or uses — Presumptive Eligibility (PI). Samoa News understands that the Medicaid Office in American Samoa is transitioning to Individual Eligibility (IE) that will allow the use of 83% or 89.3% to be applied.

However, IE will only cover US nationals, US citizens, US permanent residents, foreign "pregnant" women, and foreign children under the age of 21 years. King Young noted that they are currently negotiating with MS to see if local permanent residents can be covered.

“All others won't be covered at LBJ or DOH,” she said.

In response to multiple inquiries by Congresswoman Amata, her office, and other territorial congressional offices, CMS has responded and informed all the territorial Medicaid offices and congressional offices about these allocations “regarding the calculation of allotment amounts for fiscal years after FY 2021 for the four territories that are not Puerto Rico results in those territories receiving an allotment for FY 2022 that is modestly higher than their allotments for FY 2021.”

“This is more good news, following up on last week’s success in preserving our match rate in the upcoming CR,” Amata said. “We will continue to work diligently on extending Medicaid fully, an absolute top priority for our people.”

CMS acknowledged the congressional inquiries and supplied the following funding information in response:

For the four territories of American Samoa, Commonwealth of the Northern Mariana Islands, Guam, and U.S. Virgin Islands, for FY 2022, CMS multiplied the territory’s FY 2021 cap by the percentage increase in the medical care component of the Consumer Price Index for All Urban Consumers (CPI-U) for the twelve-month period ending in March preceding the beginning of the fiscal year. For FY 2022, this figure is 2.7 percent.

CMS notes that the law passed by Congress, under Section 1108, requires that, for FY 2023 and thereafter, the territory’s allotment will be determined based on the territory’s allotment amount for FY 2022, increased by the medical care component of the CPI-U for the twelve-month period ending in March preceding the beginning of the FY and rounded to the nearest $10,000.