Amata’s provision for $18M Nutrition Assistance for AS, and 100% match for Medicaid expected to pass House today 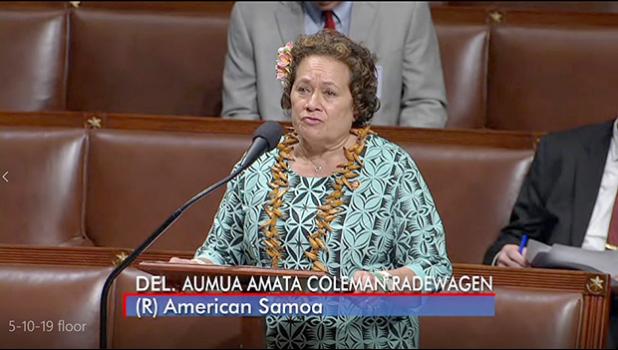 Bill passed Senate on Friday but was blocked in the House
Source: Office of the Congresswoman

Washington, DC — Congresswoman Aumua Amata is pleased to inform her constituents that the U.S. Senate has passed a disaster relief bill containing Amata’s $18 million provision for nutrition assistance in American Samoa, and her request for a 100 percent match for Medicaid. Under the new compromise bill, the Medicaid full match would last for nine months and will provide significant additional savings to the territory.

“This is great news for American Samoa, and will make a big difference for our territory and our people,” said Aumua Amata. “This bill is now very likely to become law soon based on President Trump’s public backing and successful negotiations among House and Senate leaders. The new bill includes the legislative provision I wrote for $18 million in food assistance, along with the 100 percent Medicaid coverage for ASG that I also requested. Together, these two steps will help our people in the most important ways, food and healthcare, while strengthening the territory’s financial footing. I appreciate the support of so many senators and Members of the House for listening as I repeatedly expressed the needs of our people and the impact of Storm Gita.”

After extended negotiations for a bipartisan and bicameral agreement, there was a breakthrough in the effort this week resulting in the Senate vote late Thursday. The House is now expected to vote on the same bill following the week of Memorial Day, which would send it to the President in early June to be signed into law.

Congresswoman Amata offered the provision for $18 million total nutrition assistance (a $13 million increase in the $5 million she secured in the bill with an earlier amendment) this month as an amendment in the House bill to increase American Samoa’s Storm Gita-related nutrition assistance. At the time, the House passed Amata’s amendment by voice vote. This week, the Senate picked up Amata’s provision as they worked to align the House and Senate versions and find agreement.

In a second breakthrough, the Senate included most of the House provision for Medicaid. This includes Amata’s request for a 100 percent Medicaid match, which was in the House legislation for the rest of 2019. The Senate agreed to that 100 percent match for nine months.

Congresswoman Amata spoke publicly to Congress multiple times regarding Storm Gita and the need for this funding, and successfully offered amendments twice in the process that were approved by House votes. This effort including her testimony before the House Rules Committee, and her speech on the floor of the House in May.

Samoa News notes that the bill has since stalled in the House, with House Republican Chip Roy from Texas blocking the bill in a procedural vote by Democrats to pass the bill by unanimous consent. Objections by Rep. Roy as well as some Republicans centered on money being borrowed for the aid, as well as Democrats denying money for the Mexico-US border.

But the full House is expected to pass the bill and send it to the President today, Tuesday, when they return from the 3-day Memorial Day weekend.