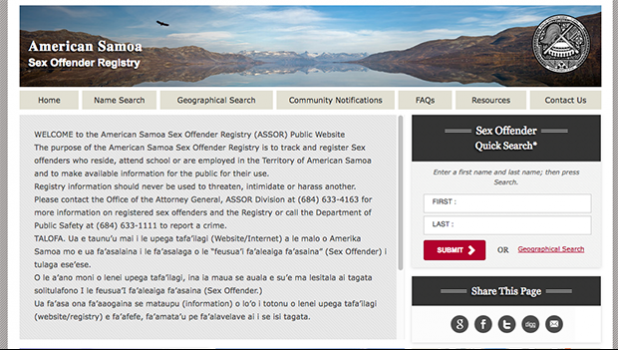 American Samoa now has an online sex offender registration website page, where names of sex offenders can be searched, while the Attorney General’s Office staff that works on this federally required program need office space to carry out their work moving forward.

The US Justice Department’s Office of Sex Offender Sentencing, Monitoring, Apprehending, Registering and Tracking (SMART) created the National Sex Offender Public Website, (www.nsopw.gov), where the names of a sex offenders can be searched. It also provides a link to website pages of each state and territory.

For American Samoa it’s: americansamoa.nsopw.gov — and called the American Samoa Sex Offender Registry (ASSOR), the purpose of which is to track and register sex offenders who reside, attend school or are employed in American Samoa and to make available information to the public for their use.

It makes it clear that “registering information should never be used to threaten, intimidate or harass another.” This information is also in the Samoan language and names of sex offenders can be searched on the American Samoa page.

The Attorney General’s Office has an ASSOR Division for the sex registry.

Two years ago, the governor signed into law legislation that puts American Samoa in compliance with all provisions of the federal Sex Offender Registration and Notification Act (SORNA). And through SORNA, the USDOJ provided funding for American Samoa, not only to comply with provisions of the SORNA, but also to set up a sex offender registry.

Last September, then Criminal Justice Planning Agency director Keith Gebauer told a House committee hearing that SORNA funding goes towards equipment, personnel, and the administration of the SORNA, which is administered in American Samoa by the Attorney General’s Office.

Since the early part of last year the Attorney General’s Office, which has jurisdiction over the sex offender registry, had been working to implement all provisions of the SORNA as well as getting the local registry up and running.

And when Talauega Eleasalo Ale appeared before the Senate Government Operations Committee yesterday morning for his confirmation hearing for the Attorney General’s post, Sen. Paepae Iosefa Faiai inquired as to the status of the American Samoa sex offender registry.

Talauega responded that staff assigned to these programs have already started the registration of names of the sex offenders, but are looking for office space to set up operations and expand its work.

Paepae said this is very important for American Samoa. However, the Alataua senator claimed that some sex offenders have had their photos and names appear on Facebook, but there are laws to protect them — referring to the sex offenders.

When the American Samoa Sex Offender Registry legislation was hotly debated in the Fono in September of 2014, several lawmakers were concerned with names of sex offenders appearing on the registry in a public domain especially when a person convicted of a sex offence has already served time and paid his/ her debt.

Then Deputy Attorney General Mitzie Jessop told lawmakers at the time “society has a strong obligation to protect our children from sexual predators.” Further, she noted that convicted sex offenders give up their right to anonymity.

“Convicted sex offenders have paid their debt to society… however, when a person is convicted of a crime, you give up certain rights,” she argued strongly during Senate and House hearings.

“We also do not want to be a safe haven for the convicted sex offenders of the world to come here because we do not have a sex offender registry. The more tools we have to help protect our children, the better,” she said.