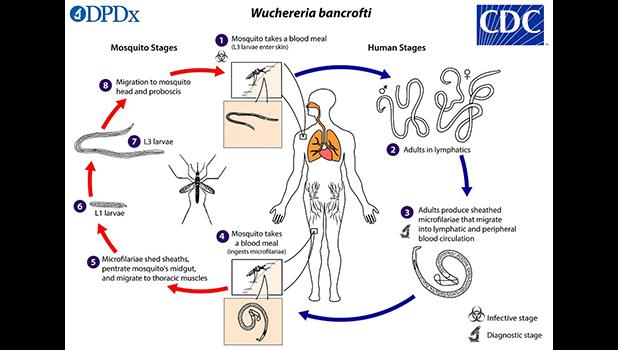 Campaign sets out to eliminate this deadly, debilitating disease
By
Fili Sagapolutele
fili@samoanews.com

Pago Pago, AMERICAN SAMOA — The Health Department is launching today, Oct. 18th — through Nov. 18th — the third round of Mass Drug Administration to eliminate Lymphatic Filariasis (LF) in American Samoa — which the US Centers for Disease Control and Prevention (CDC) says is the only U.S jurisdiction where LF “continues to pose a health risk.”

DoH’s  Lynette Suiaunoa-Scanlan announced in a news conference late last week the launch of the LF mass drug administration today, and this is a joint effort by DoH with CDC, the World Health Organization (WHO), and the Pacific Island Health Officers Association (PIHOA).

“This is the third time the Department of Health will go out and distribute Lymphatic Filariasis pills,” she said during the DoH news conference streamed-live on KVZK-TV’s Facebook page.

Samoa News archives show that the second round of mass drug administration of LP — or mūmū tutupa in Samoan — was held in September of 2019.

According to the CDC, LF is spread from person to person by mosquitoes. People with LF can suffer severe, permanent disability. Some are unable to work because of their disability, harming their families and communities.

In May of last year, the CDC published a report — “Notes from the Field: Impact of a Mass Drug Administration Campaign Using a Novel Three-Drug Regimen on Lymphatic Filariasis Antigenemia — American Samoa, 2019”, which discussed LF in American Samoa.

At last week’s news conference, Suiaunoa-Scanlan explained that LF “is a parasitic disease cause by worms that are spread to people by mosquitos. It’s a very hard, difficult disease, because you can have LF but not know you have it. The symptoms will come later on in life...”

DoH epidemiologist, Dr. Aifili John Tufa added that, “this is the third time we’re doing this. We found out that the worm that causes this disease is still around, it’s still here. If you get that worm, that worm is been transmitted by mosquitos. And it can cause disease that is very debilitating. We don’t want anyone to have it. So these pills will kill the worm and will protect you.”

Suiaunoa-Scanlan explained that the population eligible for the mass drug administration are those two years of age and older. Those who are not eligible are pregnant women, or those who think they may be pregnant, mothers who are breast feeding and those under two-years old.

DoH calls on the public for support during this campaigning and “be open to our DoH teams when we come to your village, to you home to offer the pills.”

Suiaunoa-Scanlan said DoH will release a schedule of when DoH teams will visit schools, villages and churches.

DoH said in promotional poster put out early last week, that the LF pills will be available at all DoH clinics - Tafuna, Leone, Fagaalu and Amouli. And that DoH teams “will also be coming out to villages to offer LF pills for your family to drink together.” Call DoH hotline 219 or 633-5871 for more information.