American Samoa prepares to ring in a Happy New Year 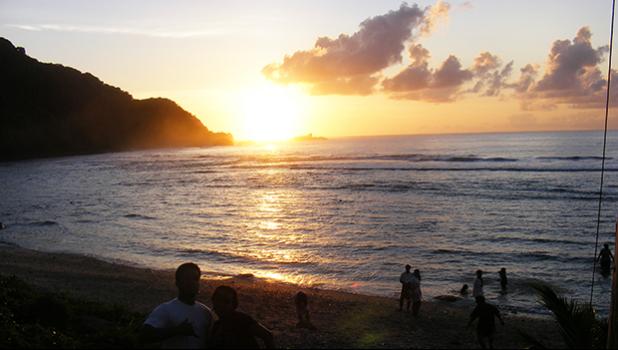 Pago Pago, AMERICAN SAMOA — Good weather and a better year — financially — are on the minds of many local residents, as American Samoa prepares to welcome 2020 at the stroke of midnight tonight, the last in the U.S. “family” to do so. Guam will be the first U.S. possession to ring in the New Year.

Church services and parties top the list of activities for the territory, which is today celebrating New Year’s Eve while it’s already 2020 in other parts of the globe, including Samoa, the first country in the world to welcome the New Year.

Many local residents as well as territorial leaders hope for a blessed 2020, especially in terms of the economy, specifically the fishing and canned tuna industry, which continued to face many challenges in 2019.

Expected to attract new visitors, “Po o Moli” or  “Night of Lights” — a tradition for the Methodist church on New Year’s Eve — will be carried out at the more than 15 parishes across the territory.

It involves different families and church groups making trees, about 10- 15 ft high, and decorated with candy or flower ulas, fabric, food items such as chips, cookies, canned goods and boxes of saimin; and of course, cash. At the end of the service, which is after midnight, decorations from the trees are presented first to church and village leaders, the elders, invited guests and finally, church members.

Many residents are hoping for favorable weather for Tutuila so they can enjoy New Year’s Eve celebrations, including a chance to go out to Poloa village around 6p.m. to watch the last sunset of 2019.

Yesterday, the National Weather Service in Tafuna said tonight’s weather conditions will include  widespread showers, heavy at times, with isolated thunderstorms. Northwest winds 30 to 40 mph with higher gusts. The forecast for tomorrow, New Year’s Day, will be mostly cloudy with numerous showers. West winds 20 to 30 mph. The Weather Office in Pago Pago continues to provide updates on its Facebook page, as they monitor an active monsoonal trough to the northwest of the islands — as of yesterday.

For those who follow Chinese astrology — 2020 is the Year of the Metal Rat — and “2020 is considered a year of new beginnings and renewals.” Chinese New Year falls on Jan. 25. 2020, according to the thechinesezodiac.org website.

As residents begin preparations for parties and head out to night clubs tonight, keep in mind that the police holiday enforcement program is ongoing through Jan. 6th.

Bars and nightclubs are reminded by the Alcohol Beverage Control (ABC) Board to comply with local laws, which prohibit the sale of alcohol after 2 a.m., the normal closing time for bars and taverns. Retail stores are barred from selling beer or alcohol after 10 p.m.

Perhaps the biggest New Year’s Eve celebration in the United States will be at Times Square in New York City, where earlier this week workers put the finishing touches on the new crystal ball, which drops at midnight. The event will be carried live on television and local residents can watch it on CNN’s special broadcast, which includes a global countdown to 2020.

Another major U.S. event on New Year’s Day is the Rose Parade in Pasadena, CA, followed later by the Rose Bowl.

As in past years, the sound of fireworks — illegal in American Samoa — will be heard island-wide, mixed with the ‘boom’ of homemade Samoan canons or “fagaofe”, which were heard across the territory before Christmas Eve.

In observance of New Year’s Day, a local and national holiday, all government offices will be closed, as well as many businesses including the local banks. DPS reminds the public to celebrate responsibly, as they will be out in full force to ensure a safe and happy New Year.

Samoa News will not publish a print edition tomorrow, New Year’s Day, and Thursday, Jan. 2nd. Print will be back Friday, Jan. 3, 2020. In the meantime, stay right here with our website or join us on our Facebook page for updates and breaking news.

Samoa News management and staff wish the people of American Samoa and our Toa o Samoa a safe and prosperous 2020.