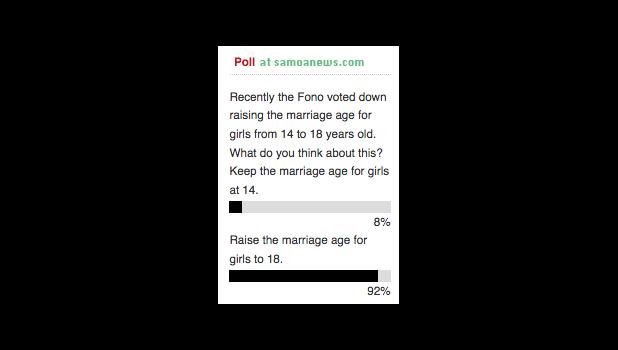 The group's president, Leuga Turner, said about 90 percent of the 600 questionnaires returned so far favour increasing the marriage age for girls from 14 to 18 or 21.

This follows the rejection by the Senate of a House bill to raise the age by which girls can marry to 18.

The Senate did not hold any public hearings on the bill before their vote.

She said none were distributed at public schools because the Department of Education had yet to clear the survey.

The full survey data is to be compiled in the coming week before the results are publicised.

ae ma le Auli will seek to change minds in the Senate if the bill is re-introduced in the next legislative session in July.

The current legal marriage age for boys is already 18.

In a Samoa News poll at samoanews.com 92% of people responding think the marriage age for girls should be raised.