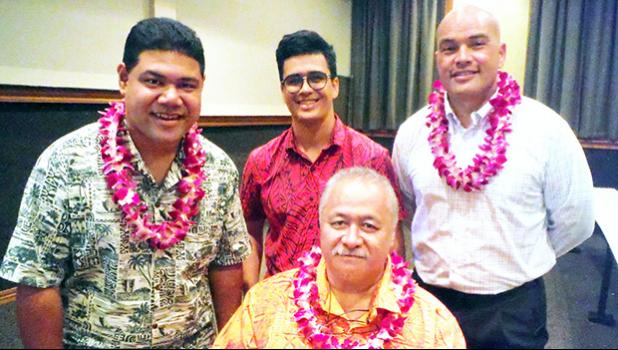 The Social Science Department at the American Samoa Community College (ASCC) hosted a Political Status Forum last week, focusing on the pros and cons of our Territory’s ongoing political relationship with the United States of America.

Students, faculty, administrators and members of the public filled the ASCC Lecture Hall to hear presentations by three authorities and to participate in the question-and-answer discussion that followed.

The most comprehensive presentation on the history and long-term effects of American Samoa’s affiliation with the US came from Dr. Aga, who explained how American Samoa enjoys a degree of autonomy with regards to its own laws protecting our lands and culture, but is also subject to federal laws, which occasionally bring challenges.

Dr. Aga cited the effect on our economy of the mandated minimum wage increase, the difficulty for some to access travel because of the federal Cabotage Law, and the recent controversies over fishing rights as examples of these challenges.

He reviewed the options American Samoa could pursue were it to decide to seek a change in its current status as an unorganized and unincorporated territory of the US.

With all of these options, he clarified, come both benefits and risks, which makes it all the more important that American Samoa’s citizens gain as much awareness as they can of the political realities before making a decision on which the path forward would truly serve their long-term interests best.

Rep. Meleisea spoke of the effect of federal laws on his own constituents, recalling how residents of his district consulted with him after losing their jobs following the cannery closure that resulted from the minimum wage increase.

Meleisea said the Fono would take action to support the will of the people, if our Territory’s residents decided by vote to seek a change in our political status. In the meantime, he encouraged all young adults to familiarize themselves as much as possible with both the history that has led to American Samoa’s current political status as well as the options still open to us for the future.

Kuaea posed a number of thought-provoking questions to encourage critical thinking on the subject. “Is it reasonable,” he asked, “to believe that the political status our forefathers received aligned with our people’s best interests given the discrimination that other peoples of color were experiencing at the time?”

He later rounded off the forum using the evolution of the cellular phone as an analogy. “As limitations were encountered with this man-made creation,” he said, “modifications were made to the phone’s design to better suit the needs of a changing society. Is it reasonable to assume that our political status, a man-made creation still in its original design from the early 1900s, is sufficient ‘as is’ to meet the needs of American Samoans in the 21st Century?”

Several ASCC students, who attended the forum, agreed that the forum provided valuable clarification on a subject many find difficult.

“Talking with my peers, most were unaware of our Territory’s political status and why our local leaders are not making a move to change things we feel are unjust against us,” said Political Science major Mary Nautu. “This forum explained our Territory’s status quo in regards to the USA, and I believe that everyone in our Territory deserves to know where we stand because, our Territory holds the highest enlistment in the United States military.”

As to a change in political status, Ms. Nautu expressed reservations. “I am against losing my culture in order to reap the fruits of fully applying the US Constitution here. Our forefathers were wise enough to make decisions for our Territory a century ago. I am positive that the status quo they decided for us is still the best.”

Ms. Neolani Semaia, also a Political Science major, also favors a cautious approach to the status quo. “Many see the words ‘unorganized and unincorporated’ then assume that we should be organized,” she said, “but I personally feel that we should stay the way we are. Although we have some flaws, American Samoan is better off the way it is.”

Mrs. Elena Tavai, a non-traditional ASCC student who is also the Student Representative to the Board of Higher Education, summed it up for many. “I enjoy the liberties we have been blessed with especially when comes to land rights,” she said.  “I believe we are fortuitous in that we enjoy a piece of the American Dream yet at the same time honor our forefathers and live the fa’aSamoa way of life.”