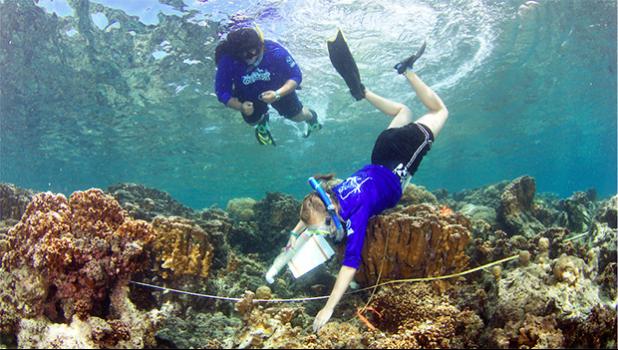 Have you ever wondered how reef and fishery health are measured? Students in the American Samoa Community College (ASCC) Marine Science Program learned many of the standard methods used by scientists to measure marine health over spring break.

The students were joined by two ASCC faculty, Meagan Curtis and Kelley Anderson Tagarino, and University of Hawai‘i at Manoa Marine Option Program coordinator, Jeffrey Kuwabara.  Many local agency staff, representing the Department of Marine and Wildlife Resources (DMWR), the National Marine Sanctuary of American Samoa (NMSAS), the Coral Reef Advisory Group (CRAG), and the National Park of American Samoa (NPSA) donated their time to help students in QUEST gain new skills in monitoring the health of our coral reefs and reef fish. By the end of the week, participants reported an improvement in their surveying skills and knowledge of the marine environment.

“I am proud of each of the participants, they all significantly improved their in-water survey skills as well as their data collection and management abilities,” stated instructor Curtis. ASCC ACNR & Hawai‘i Sea Grant extension agent Anderson Tagarino explained, “This is the seventh year we have held QUEST and we continue to receive high reviews from local agency staff and student participants. By training students in field techniques used by local agencies, they are prepared to assist in Territorial marine monitoring needs, such as the current coral bleaching and alamea (Crown of Thorns Starfish) outbreaks.”

This year, two past QUEST students participated as team leaders, acting as mentors and guiding the first-year QUEST students through the week of intensive studies.

When Claudia Thompson, a team leader, was asked how she thought QUEST went, she responded, “As a mentor, I learned all the skills in even more detail since I was helping to teach these methods and concepts.”

Filifaatali (“Tali”) Samoa, a new QUEST student, said, “QUEST was hard, but I actually miss it!  I learned so much, and thanks to QUEST, I have new skills I can put to use trying to protect our island’s reefs and fisheries.”

The American Samoa QUEST is modeled after the highly successful course of the same name offered by the University of Hawai‘i at Hilo.

The American Samoa QUEST has students using snorkels and masks rather than SCUBA gear as is done at the University of Hawai‘i. Though the gear is different, the methods and science learned are the same. Students spend the week studying methods for counting fish, algae, corals, and other invertebrates. After studying each method, they take to the water, working in groups to collect data used for answering a research question each group comes up with. Data is then analyzed and presented by each group at the end of the week.

The intense workload of this field course led the students to push themselves to learn the many new techniques in a short period of time. Instead of staying up late partying over spring break, students stayed up late analyzing data – and enjoyed it!  Partners from the ASCC ACNR, ASCC Marine Science Program, Rose Atoll National Wildlife Refuge, NPSA, CRAG, NMSAS, and the University of Hawai‘i Marine Option Program assisted in teaching the methods and in conducting in-water surveys.

Many local agencies donated time, materials, and services to make QUEST possible. These include the Office of the Governor, ASCC ACNR, UH Manoa Marine Option Program, and the Nu’uuli Village. The QUEST instructors extend their appreciation to the NOAA National Marine Fisheries Pacific Island Regional Office, which funds the American Samoa QUEST. On behalf of the Hawai‘i Sea Grant College Program and the American Samoa Community College and ACNR, the instructors sincerely thank these sponsors for making QUEST possible.

The QUEST course will continue to be offered every year over ASCC’s Spring Break, which is usually the second week of March. Those interested in participating as students or sponsors can contact Kelley Anderson Tagarino at 699-3353 (office) or 258-2967 (cell) or at KelleyAT@Hawaii.edu on email, or via post mail at P.O. Box 2609 for more information.