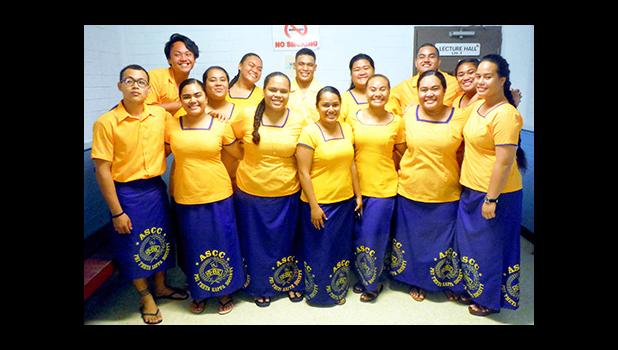 The American Samoa Community College (ASCC) Alpha Epsilon Mu chapter of the Phi Theta Kappa (PTK) Honor Society held its fall 2016 induction ceremony on Thursday, September 22, welcoming 15 new members who took the oath of allegiance into the prestigious nationwide organization. Family and friends of new and existing PTK members and representatives of the ASCC administration all gathered to help celebrate this prestigious event, which was themed “Good as Gold”.

Miss Lafaele, an ASCC alumnus and former President of the Alpha Epsilon Mu Chapter, studied Public Health and Epidemiology as an undergraduate at the University of Hawaii at Manoa. A member of the UH Manoa Honors Program, she also served as President of the campus Fealofani o Samoa Club. She represented American Samoa in both the Childhood Obesity Research at UH Manoa, as well as in President Clinton’s National Civilian Community Corps, with whom she did community service work for two years in San Diego. Upon returning home, she served as principal writer and editor of the ASG Newsletter during the Togiola Administration, and currently assists in designing and managing the ASG website. She has recently been accepted to the John Hopkins School of Medicine in Baltimore, Maryland, where she will study Clinical Pathology.

For her keynote speech, Miss Lafaele offered her individualized take on the subject of serving others, reminding the audience of the importance of service in the Samoan culture and incorporating the wisdom of Mahatma Ghandi and Martin Luther King Jr. “Let service to others define every aspect of your life,” she encouraged the PTK inductees, “and earn your success in the service of, not at the expense of others.”

Every semester, PTK advisors Kuki Tuiasosopo, Ernie Seiuli and honorary advisor Evelyn Gibbs Fruean review student transcripts, reference letters, application forms and essays, and other relevant data to determine which students qualify for the membership in the Society. Candidates must have taken at least 12 credits, passed their English 150, English 151 and Math 90 classes, and have earned a cumulative grade point average of 3.5 or higher.  Qualifying students receive an invitation to join PTK, and most of those invited readily accept the offer. Current PTK officers include Ofeira Brown (President), Vaimalu Vaiau (Vice President),

The PTK provides more than $35 million worth of scholarships annually to students nationwide. Each member is automatically nominated for inclusion in the prestigious National Dean’s List, and is also enrolled in the PTK Transfer Database, which links senior institutions across the nation offering scholarships to PTK members. For more information about the nationwide activities of Phi Theta Kappa, visit their website at: www.ptk.org