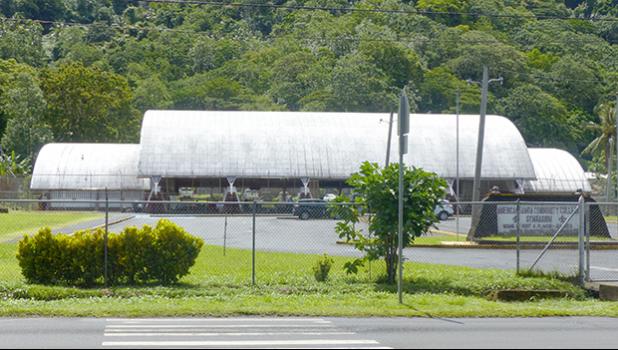 Pago Pago, AMERICAN SAMOA — From the side of the main road at Mapusaga on Wednesday afternoon is this Samoa News photo showing the American Samoa Community College gymnasium, which — at the time — was one of two ASG quarantine facilities housing local residents stranded in Samoa and uplifted early this week on Samoa Airways flights to the territory.

Among the big complaints at this facility is the presence of mosquitoes.

ASG officials said passengers quarantined at the gym were transferred yesterday to the Catholic Diocese of Samoa Pago Pago, Retreat House or Pastoral Center at Fatuoaiga with ASG managing the quarantine area.

Church members and others have been informed by notice that the main gate is locked as well as the center’s side door. The center was initially to house the Americans evacuated Tuesday from Samoa to catch last night’s Hawaiian Airlines flight to Honolulu. But ASG officials say the Americans are staying at two local hotels and the US State Department is footing the bill.