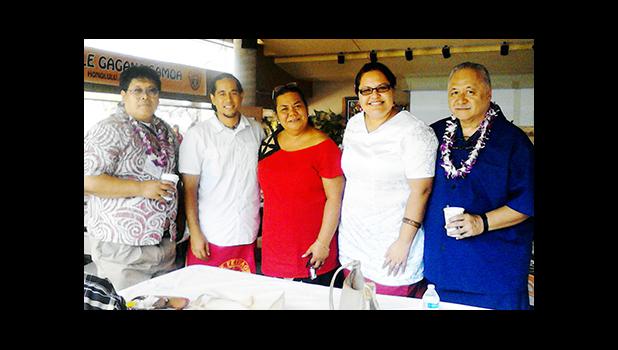 Mrs. Okenaisa Fauolo-Manila, Director of the Samoan Studies Institute (SSI) at the American Samoa Community College (ASCC) provided one of the keynote addresses during the 2016 Samoan Language Symposium, which took place on Friday and Saturday, August 12th and 13th, in Hālau o Haumea of the Kamakakūokalani Center for Hawaiian Studies at the University of Hawaii at Manoa. Hawaii-based Le Fetuao Samoan Language center organized the symposium as part of its sustainability plan to further enhance its community-oriented Samoan language and culture program.

The mission of Le Fetuao is to increase literacy of the Samoan language among the Samoan community in Hawaii’s children, youth, and parents while also contributing towards the understanding of Samoan culture and the development of Samoan identity. Le Fetuao’s stated purposes for the symposium were to increase the number of Āʻoga Samoa (Community-Based Samoan Schools) that teach the Samoan language and culture; to provide a space to build strong collaborative relationships between new and existing Samoan language programs throughout the United States and the Pacific; and to promote the Gagana Samoa (Samoan language) and its importance in the 21st century.

The first day of the symposium featured a series of hands-on workshops geared towards utilizing interactive techniques to teach the Samoan language.  The workshops focused on the perpetuation of Measina o Sāmoa (Cultural Treasures of Sāmoa) such as siapo (tapa), lalaga (weaving), and tatau (tattooing).  The workshops also featured hands-on lessons on using art, music and dance, traditional food preparation, and technology to teach Gagana Sāmoa. On Saturday, participants heard from successful Samoan and Pacific community language programs in Hawai’i and gained insights from keynote speakers and panel discussions between Samoan language educators from the United States and the Pacific region.

Mrs. Fauolo-Manila gave one of the keynote addresses on the first day of the event. “I gave a presentation titled ‘Faamolemole, tautala mai pea. Please keep talking,’” she said. “I spoke on how the SSI handles the challenges we face not only in recruiting students to take Samoan courses and even to major in Samoan studies, as well as our approach to make students understand their past and how they come from an old culture. We emphasize how the faasamoa is alive because of its ability to adapt.”

The SSI Director also participated in the discussions on the second day, sharing further on the extensive community involvement of the Institute. “I recalled how in 2008 and 2009 we visited different local churches to speak about our focus on Samoan culture and language, and to offer to return to the church to give a more detailed presentation,” said Mrs. Fauolo-Manila. “Every church we visited asked us to come back, so we worked during the weekends with them. It was from these sessions with the community that we shaped projects such as sharing the Samoan lunar calendar, our involvement with the Leone Healing Garden, and other activities.”

Mrs. Fauolo-Manila took the opportunity to network with fellow Samoan and Pacific languages educators from across the US and Oceania. Familiar faces at the symposium included Dr. John Mayer of the UH Manoa Samoan Language Department and Dr. Tusi Avegalio of the Pacific Islands Development Center, along with educators in other regional languages such as Dr. Ku Kahakalau (Hawaiian), Dr. Faye Untalan (Chomorro), and Dr. Betty Ickles (Tokelau). A particular inspiring attendee, according to the SSI Director, was Jacob Fitisemanu from Utah, who has initiated SAILI (Samoana Integrated Language Initiative) there, and created the Samoan language T.O.O.L. Kit (Teach Our Own Language).  Fitisemanu also serves as a Commissioner for President Obama’s Advisory Commission for the White House Initiative on Asian American and Pacific Islanders.

Reflecting on the event, Mrs. Fauolo-Manila commended Le Fetuao for their vision. “I am so grateful that we are now connected with Le Fetuao,” she said. “So far, we have done a number of translations for them, shared our video resources, and put together their promotional DVD that can be viewed on their website. Thanks to Le Fetuao and others making similar efforts, our faasamoa continues to thrive. Most of the children in the Le Fetuao School’s parents were born in Hawaii, but even though they have limited access to the faaSamoa, they still know the value of their heritage. This is how community programs like Le Fetuao perpetuate our Samoan culture.”

Co-sponsoring the symposium with Le Fetuao were: the Administration for Native Americans, the University of Hawai’i Samoan Language and Literature Program, the Center for Pacific Islands Studies, and the Center for Hawaiian Studies.

To learn more about Le Fetuao, visit them online at: www.lefetuao.com.