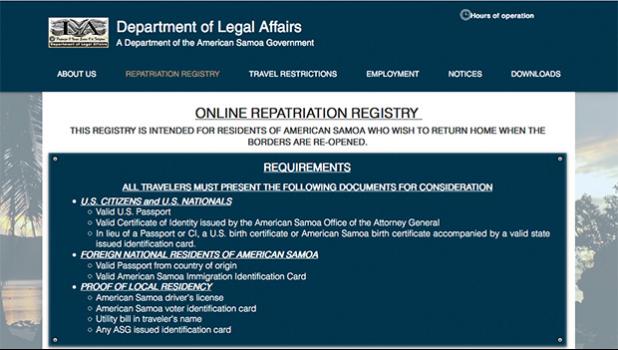 Pago Pago, AMERICAN SAMOA — The American Samoa Government now has its own online “repatriation registry” for American Samoa residents, “who wish to return home when the borders are re-opened”. And the territorial government makes clear that registration on the ASG portal is not a guarantee that the person who is registered, will be able to travel.

Meanwhile, a new petition launched last Friday and started by Francis Vaofanua, calls on Gov. Lolo Matalasi Moliga to keep American Samoa’s boarders closed to prevent the spread of the coronavirus to the only U.S jurisdiction — state or territory — without a case.

Through the Department of Samoan Affairs, the American Samoa Online Repatriation Registry was quietly launched sometime in the past few days. ASG sources told Samoa News that the registry is needed for the government to get accurate data on local residents stranded off island and wanting to return home. And such data will include an accurate count of those stranded.

Additionally, the registry is also needed so that ASG can conduct a thorough vetting process as to who qualifies “under our current COVID-19 restrictions and other requirements, ahead of any repatriation flight or flights,” which is a decision that can only be made by the governor and the lieutenant governor, according to government sources.

Samoa News points out that the only unofficial data available so far is through a petition launched by the Tagata Tutu Fa’atasi Alliance of American Samoa, the group behind the push for a repatriation flight from the US for local residents stranded off island. The group’s petition — which was also sent to the Fono — has the names of stranded local residents.

The ASG registry — https://www.legalaffairs.as.gov/repatriation-registry — outlines required documents for consideration, when a person registers to return home. Among those documents is a valid US passport for US citizens and nationals or a valid Certificate of Identity issued by the local Attorney General’s Office.

For foreign nationals who are local residents, a valid passport from the person’s country of original and a valid American Samoa Immigration Card. Also required is a proof of residency, such as a driver’s license, local voter ID card, utility bill in the traveler’s name or any ASG issued ID cards.

A negative COVID-19 test 72 hours before leaving for American Samoa is also a requirement already outlined in provision of the governor Eight Amended COVID-19 declaration, which currently lapses on Sept. 30th.

The repatriation registry includes the local Health Department travel health declaration form, which can be down loaded, filled out and submitted with the registration. Among the questions on the form is whether the person has travelled to a country with active COVID-19 transmission as well as any health/medical issues.

According to the registry, all travelers exhibiting the following symptoms may be denied boarding: cough; sore throat; fever, and flu-like symptoms.

For travel related questions, contact the Travel Division at 633-4163 or email Katrina Seumanutafa — hunkink@la.as.gov — at the local AG’s Office.

A new petition — with the hashtag #keepbordersclosed — calling on the governor to keep the territory’s borders closed, as of yesterday morning had 72 people signed on, with the immediate goal of 100 signatures.

“American Samoa is one of the very few places on this earth that have [sic] never recorded a case of Covid-19,” according to language of the petition ( https://www.change.org/p/american-samoa-governor-keep-the-borders-of-american-samoa)

“The United States are [sic] recording thousands of cases and hundreds of people dying everyday. While all this is happening and is worsening by the minute, the government is planning a repatriation flight,” the petition states. “We fear that with the current circumstances and the lack of resources, our small island and its one hospital is not ready to open those borders!!!”

A special committee appointed by the governor to come up with plans for a repatriation flight was to submit their report today to the ASG coronavirus task force for review. (See yesterday’s Samoa News edition for details.)