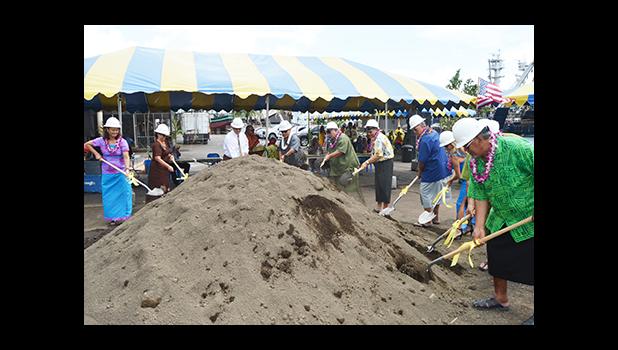 The ASG Shipyard Service Authority yesterday broke ground for a $1 million project, which includes the construction of a two-story building, as well as major improvements to the 3,000-ton slipway for large vessels and the 1,000-ton slipway for small vessels.

Funded with proceeds from the American Samoa Economic Development Authority (ASEDA) bonds, the construction project will take less than 12 months to construct and bring workshops — housed in the building — into full compliance and operation, according to information provided by the shipyard.

The building will be a “steel-frame, pre-engineered” structure procured from the US, by a local company, displacing an old and existing facility. The remaining aspect of the construction will be done locally with specific areas handled by shipyard personnel.

In a news release early this week, shipyard chief executive officer Moefa’auo Bill Emmsley explained that the facility’s workshops are at the “core of its daily operational mantra”, where almost 85% of ship repair activities are undertaken.

Without workshops, he said proper and delicate repairs couldn’t be done; and when repairs are not carried out, revenues won’t be earned and vessels will remain untreated and dysfunctional.

Speaking at yesterday’s ground breaking, Moefa’auo said the current facility “has gotten to a point where it’s unsafe to work in some of these shops” and therefore production has also suffered and certainly “our competitive edge”.

“We want to make sure that we protect and preserve this asset that belongs to the people of American Samoa, because other than New Zealand we’re the only one that has a 3,000-ton slipway in the region,” he said and noted that Fiji has one “but not in the same standard.”

“If we allow the slipway and the shipyard to deteriorate to the point of inoperable, then we lose a great asset,” he explained. He went on to say that he read something in the newspaper suggesting that “we should not invest in the shipyard — or the ‘medical center for vessels’ — because one of our canneries, [is] showing signs of weakening.”

“...We differ in that opinion. We want to maintain it because it’s not only that we serve the fishing fleet — obviously that’s our primary revenues — but we also serve the vital interest of the territory and that is preserving government boats serving the Manu’a islands, Swains island, even [neighboring] Samoa, they bring their boats here to be hauled up and repaired,” Moefa’auo said, pointing also to the ASG tugboats, which are regulated by the US Coast Guard (USCG).

“Now could we imagine, if one of our boats, government owned public assets, gets shut down [by USCG], the next closest shipyard would be in Fiji. We are then crippled at that point,” he said. “So I have to beg the differ from those who suggest that we should not invest in the shipyard.”

In his brief remarks Gov. Lolo Matalasi Moliga told the audience the shipyard is the lifeline for the canneries, the government and vessels. According to the governor the territory cannot ignore the needs of the canneries when it comes to vessels, as whatever happens to the canneries will greatly impact American Samoa as a whole.

He said that he has told Lafaele that by the end of 2018, the shipyard should be in a position where it’s trusted by fishing vessels.

And that means the shipyard should be by that time, “fully certified” including full insurance coverage for not only the shipyard but vessels coming in for repairs, Lolo said, adding that nearly $5 million — including the ASEDA funding, Interior Department grants and special program monies — have been allocated to the shipyard, an important asset for American Samoa.