ASG Treasurer reminds the Fono that revenue numbers are only “projections” 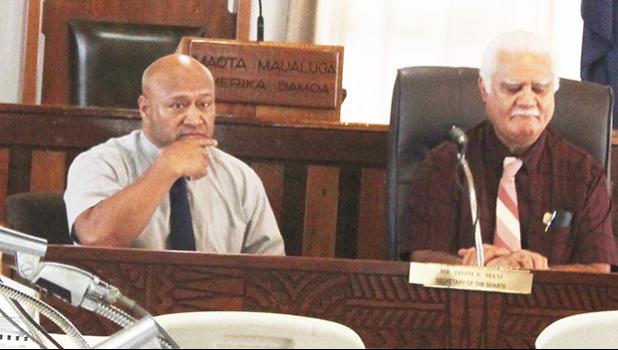 Rep. Sanitoa says there is a ‘trend’ that causes a shortfall
By
Fili Sagapolutele
fili@samoanews.com

It was made clear at the start of the hearing, that Budget Office director Catherine A. Saelua was unable to attend due to unforeseen circumstances, hence Satia’s presence. And this was accepted by the joint committee, which still plans to call Saelua in, at a later time, if lawmakers have specific issues that require further details.

Responding to committee questions, Tonumaipe’a explained that general revenue for FY 2018 was $92.81 million while projected revenues for the first three-quarters of FY 2019 should reach around $94.6 million. The last quarter of FY 2019, ends later this month on Sept. 30th.

Tonumaipe’a noted several times during the hearing, that revenue numbers in the budget are only projections.

Rep. Larry Sanitoa told the Treasurer that there has been a trend for the last three years, whereby actual revenue collections have dropped and yet when the budget is submitted “we’re still projecting way over” than what’s collected the previous fiscal year, causing a shortfall.

Tonumaipe’a acknowledged Sanitoa’s statement, but noted that these are “only projections” and they are based on the new revenue bills, passed by the Fono and enacted into law, such as scanning fees.

Sanitoa responded that there was also an increase in the excise tax last year but ASG still hasn’t reached actual revenue collections compared to projections with the new tax measures.

“Are we taxed out?,” he asked Tonumaipe’a. “In other words, is the economy not doing so well in that we continue to impose new taxes but ASG is still unable to reach those projections?”

Tonumaipe’a said Sanitoa’s statement is perhaps correct, but he reiterated that these are only projections. He went on to say that looking at the past four fiscal years, even though the projections were not realized, ASG still had a “surplus”.

“Isn’t that right?,” Sanitoa asked, to which the Treasurer’s reply was, “It all depends.”

Sanitoa then moved to other budget related issues, such as proceeds received from other sources like the American Samoa Hawaii Cable dividends, money ASG received from insurance following Tropical Storm Gita, and revenues received after the sale of the 2018 bond series.

Sanitoa reminded the Treasurer that under the law and the local Constitution, it is the Fono that has the authority to pass legislation appropriating spending of these proceeds and all other local revenues.

For the 2018 bond series, Tonumaipe’a said it is not ASG money or local revenue but instead, these are money from off island investors, who invested money in “our bond” based on the projects ASG presented to them.

Sanitoa disagreed saying, “At the end of the day, the taxpayer is paying for these bonds.”

With his time up, Sanitoa yielded to the committee chairs so other lawmakers could ask questions. Among the issues raised was the breakdown detail of the $8 million allocated for the ASG debt service, which is listed under the Enterprise Fund of the FY 2020 budget.

The committee requested a report on the breakdown of debts to be paid with the $8 million, as well as an updated report on the latest revenue collection.

Tonumaipe’a explained that his department has a small proposed increase of $150,000 compared to FY 2019. He said the hike is due to workers who were contracted for the scanning equipment but come FY 2020 will be paid under local funds.

The issue of ASG employees getting paid their increments — as clearly stated in the budget — was raised with Tonumaipe’a, who explained that once increments are due, his department fills out the paperwork and sends it to the Dept. of Human Resources.

Satia said there are times when revenue collections are not so good, increments are not paid. This raised more questions from lawmakers, prompting Magalei to step in, saying the governor has the final say on paying increments.

Magalei, a former ASG Treasurer and Budget director, pointed out that many ASG workers haven’t received their increments to this day.

As previously reported by Samoa News, the governor put a freeze on increments when his administration took office and the freeze was lifted last year — and it all depends on revenue collections, whether or not increments are paid.