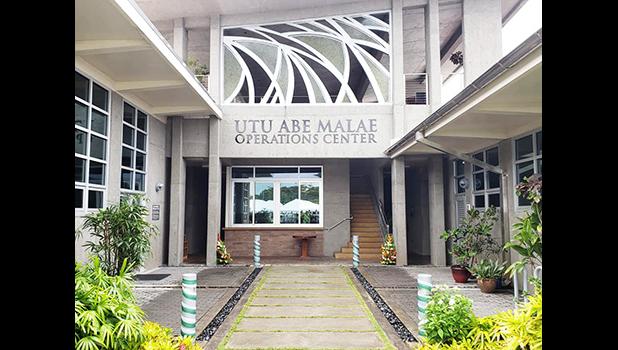 Speaking at the event - which was aired Tuesday night on KVZK-TV - at the ASPA Tafuna compound, Gov. Lolo Matalasi Moliga said the ground breaking of the two-multimillion- dollar solar energy projects was made possible because of Utu.

“His vision, his values, bring about what we are witnessing today. He is one person in my life that I find to be very unique,” Lolo said of Utu, and recalled back in 2012 - about two weeks before Christmas and after Lolo won the gubernatorial race - that he met with Utu and “tried to convince Utu to stay with us and help us out.”

Lolo described Utu as “a real tough person to deal with. Very independent, very well brought-up. His values are in a way inspired by his upbringing.  And what I learned from the [meeting] was, Utu had a very unique character, inspired by the love for his people.”

“And that was the only reason why Utu decided to stay with us. Because of that love he had for our people,” said Lolo, adding that he promised Utu: “I would never interfere with his job, I have full trust in him.”

Lolo revealed that the ASPA board of directors - chaired by Fonoti Perelini Perelini - that he appointed (and later confirmed by the Fono) was recommended by Utu. He said the board is “the most qualified board that I have ever worked with.”

He also recalled for the audience what he told Utu during their meeting. And that is, to bring down the cost of electricity - which was over 40 cents per kilowatt hour - down to 10 cents.

“All he said was, ‘Lolo, you’ve got to have patience’. And that patience I learned from Utu, kept me alive today,” the governor said, and explained that he had met with Fonoti and the ASPA board, to look at options for something to be named after Utu.

“I thought, it’s something that we should do, not to remember Utu, but for our young generation when they grow up and come about… they can emulate his life,” Lolo said, noting that Utu was a great “role model”.

One is the solar photovoltaic farm to be built near the Veterans Memorial Stadium in Tafuna at a price tag of about $43 million and contracted to Canadian Solar/Recurrent Energy. It will generate 20 megawatts of electricity, according to ASPA acting executive director Wallon Young, during his presentation at the ceremony.

The second project - costing about $100 million and contracted to Green Global Solutions - will be built in Aasu village and will produce 42 megawatts.

In his speech, the governor said, “I went through the records and I checked that after the completion of these two projects, electricity costs may come down to as low as 10 cents per kilowatt hour.”