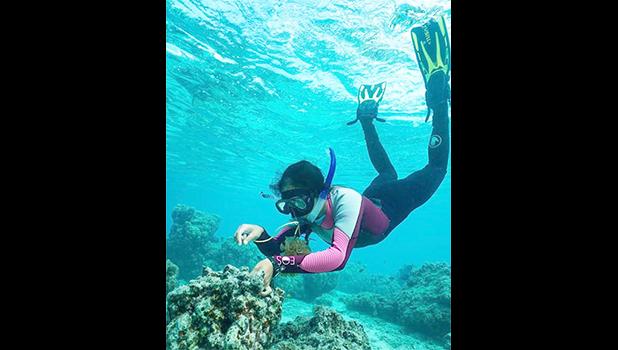 It's a balancing act
By
Yaamini Venkataraman

Seattle, WASHINGTON — A coral reef is part of a delicate balancing act. When stony corals dominate the ocean floor, they form vibrant reefs that are home to marine life. Besides being hotspots teeming with life, reefs can protect shorelines from storms by absorbing coastal swell and storm surge.

But corals are also constantly competing with algae for space. If algae out-compete the corals, once-productive coral reefs can become covered by algae, forming deserted areas called algal barrens. When this happens, the natural reef barrier breaks down, leaving our coastlines vulnerable to flooding and property damage. When coral reefs are damaged and overrun by algae, how can the scale be tipped back towards healthy coral reefs?

Dr. Nancy Foster Scholar Nury Molina plans to study the tipping point between a healthy coral reef and an algal barren at National Marine Sanctuary at American Samoa as a first-year Ph.D. student at the University of California, Santa Barbara. Her Ph.D. is funded by the NOAA Dr. Nancy Foster Scholarship Program, which provides support for master’s and doctoral degrees in sanctuary-related ocean sciences.

What causes the scales to tip in the first place? When corals are compromised, algae can take over the spaces they previously inhabited. Natural disturbances, like cyclones, can damage reefs. Additionally, human-caused disturbances, like sediment and nutrient runoff from land, can kill corals and encourage algae growth on reefs. Warming ocean waters stress corals, causing them to expel the symbiotic algae that live within them — a phenomenon called coral bleaching.

“One of the first things that I noticed on my first dive in Fagatele Bay was that the coral was lush and healthy, and there was very little algae,” says Brown. “The next thing I noticed was that there were numerous herbivorous fish and many were actually competing for algae to eat.”

If these fish can consume the algae that competes with coral faster than it can take over the reef, then the scales may be in favor of coral reefs.

“I’m interested in American Samoa because it’s a system where I have the chance to study areas that are maybe more heavily-impacted by nutrients or overfishing, and compare it to areas less-impacted by humans [within American Samoa].” Through this comparison, Molina can gauge the role of fish in preventing coral reefs from tipping into algal barrens. She also hopes to compare her potential findings in American Samoa with her other research site, Mo’orea in French Polynesia.

Although Molina will not travel to American Samoa until later this year, she has been studying coral reefs since she was an undergraduate. As an environmental science major and conservation biology minor at the University of California, Los Angeles, Molina interned with Reef Check Foundation . Through this organization, Molina learned how important reefs were.

“[Coral reefs] are home to 25 percent of the world’s marine species but they cover less than one percent of the Earth,” Molina says. “They are vital to us and I wanted to conduct research to figure out how to protect them.”

Molina was also accepted into the Diversity Project while she was an undergraduate, a National Science Foundation-funded Research Experience for Undergraduates program that aims to involve underrepresented students in marine science research. Under the guidance of two UCLA professors, Molina and other undergraduate students set off for Mo’orea in French Polynesia. In Mo’orea, Molina earned her scientific diving certificate and participated in coral reef research. When she returned to Los Angeles, she started working with one of the program leads, Dr. Peggy Fong, as well as graduate student Shayna Sura, to study the role of fish in coral reefs.

Molina’s project at UCLA prepared her for her future work at American Samoa. For her project with the Diversity Project, she conducted herbivory assays in Mo’orea reefs, where she placed known amounts of different algae in the reef and watched fish consume the algae on video cameras. Examining different fish species’ preferences for various algae is important because not all fish may eat the same algae, let alone the main species outcompeting corals.

“You have to sit and watch many hours of video, and it can especially be time-consuming when there’s a lot of fish at one time,” Molina says. “[However] it’s a really cool way to get a lot of data. You can get the herbivory rate and the size of the fish. You also see fish that normally aren’t there [when you dive] because they don’t come out around humans.” Molina will use similar field experiments at American Samoa, because these experiments “give a more realistic understanding of all of the mechanisms that take place in coral reefs.”

Molina’s work will allow National Marine Sanctuary of American Samoa to plan for reef resilience in changing conditions. The sanctuary recently placed a buoy to monitor chemistry conditions, and Molina’s research will allow the sanctuary to understand how species interactions may affect these reefs. Local communities also depend on these reefs for tourism revenue, coastal protection, and food. Knowing how to rebalance the scales can allow for ecosystem and human resilience.

"While many reefs are overtaken by algae and struggle to recover after disturbances, the reefs in Fagatele have recovered and have little algae," Brown says. Molina's work "will help government agencies and local communities decide which fish species to manage to ensure that reefs stay healthy."

Molina hopes to partner with local organizations and Samoan youth to spread the importance of her work. According to education coordinator Isabel Gaoteote Halatuituia, the sanctuary currently involves Samoan youth in several programs, including Sanctuary Summary Science in the Village. This program allows students living in sanctuary communities to engage in hands-on learning and discovery of important and special places in the sanctuary — something Molina agrees is important.

Molina has worked with the nonprofit Reef Check to bring underserved students to the ocean for the first time. “It’s really amazing seeing people’s eyes light up,” she says. “It showed me we really need to start [outreach] from an early age.”

Between Molina’s research, the management expertise of government agencies, and historical knowledge of local communities, it’s likely coral reefs at National Sanctuary of American Samoa will have help with their balancing act — ensuring Samoan youth will see healthy reefs for years to come.

Yaamini Venkataraman is a volunteer social media intern for NOAA’s Office of National Marine Sanctuaries and a graduate student at the University of Washington.
END_OF_DOCUMENT_TOKEN_TO_BE_REPLACED