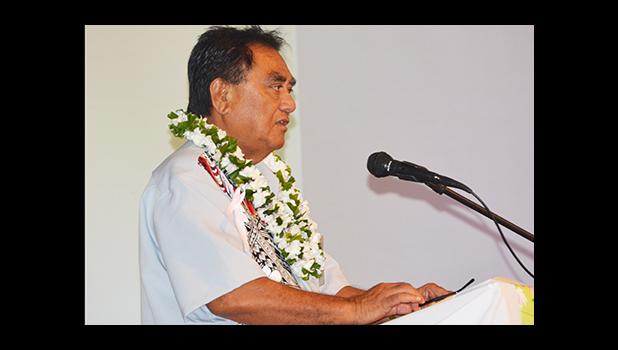 LBJ Medical Center Chief Executive Officer Taufete’e John Faumuina has described as “alarming” the high number of Zika virus cases in American Samoa and two other US territories while a US Center for Disease Control and Prevention (CDC) report looks at Zika virus’ spread in American Samoa.

Taufete’e was speaking last Friday at the official opening of the two-day Medical Symposium, under the theme ‘Medical Challenges in the Territory: Cancer and Infectious Diseases’. Taufete’e, who delivered opening remarks, cited dengue fever and Zika virus as two examples of growing infectious diseases in American Samoa.

He pointed to a review last month by the CDC, in which it states that “Zika virus is much more prevalent in the US territories with 19,777 total cases in American Samoa, the US Virgin Islands, and Puerto Rico.”

And as of last week, CDC reported 4,016 Zika cases in the United States, while the US territories now have 27,314 cases, Taufete’e said, adding that there is a variance of over 23,000 affecting the three territories as compared to all 50 states in the nation.

“The numbers are alarming and warrant a cause to be proactive and take ownership in finding solutions for the medical challenges we face in American Samoa,” Taufete’e told the audience of medical professions.

For American Samoa alone, the local Health Department’s data released early last week says that as of Oct. 13, there were 896 suspected Zika cases with 53 confirmed through laboratory testing. Of the confirmed cases, 21 are pregnant women.

Zika and dengue fever were among the presentations during the Medical Symposium, which was closed to the public, and concluded last Saturday afternoon at the Gov. Rex Lee Auditorium.

Last Thursday, the CDC released its Morbidity and Mortality Weekly Report titled, ‘Notes from the Field: Outbreak of Zika Virus Disease - American Samoa, 2016’. The report, compiled by CDC and its local health partners, details the introduction of Zika into American Samoa and the challenges presented during the response.

According to the report, posted on the CDC website, during December 2015 to January 2016, the local Health Department (DoH) detected through surveillance an increase in the number of cases of acute febrile rash illness. Concurrently, a case of laboratory-confirmed Zika virus infection was reported in a traveler returning to New Zealand from American Samoa.

In the absence of local laboratory capacity to test for Zika virus, the report says DoH initiated arboviral disease control measures, including public education and vector source reduction campaigns.  On Feb. 1st, CDC deployed staff to the territory to assist DoH with testing and surveillance efforts.

The CDC report went on to explain how the Zika virus was tracked and monitored from the beginning until specimens were send to off island for testing. According to the report, suspected Zika cases were monitored through syndromic surveillance using automated searches of the electronic health record (EHR) system at LBJ hospital and DoH’s four health care clinics in the territory.

It also says that DoH collaborated with the Pacific Island Health Officer Association, the Hawai’i state Department of Health, and CDC to establish laboratory capabilities.

According to the report, between January and July specimens were collected from 98 pregnant women who had sought testing, regardless of their symptoms, as well as from 90 non-pregnant female and male patients within 5 days of at least one sign or symptom of Zika virus disease, including fever, rash, arthralgia, or conjunctivitis.

It notes weekly shipments of two to 25 specimens to the Hawai’i Department of Health laboratory for testing and to CDC’s Arboviral Diseases Branch for confirmatory testing.

The weekly number of both suspected infections identified through syndromic surveillance and confirmed infections peaked during January 24– 30; the month with the highest number of confirmed cases was February.

The report points to a registry of all currently pregnant women identified in the territory was created to facilitate monitoring for adverse outcomes and implementing targeted prevention efforts. To reduce the risk of Zika virus transmission, prenatal health clinics distributed Zika prevention kits containing mosquito repellents, bed nets, and condoms to 674 pregnant women.

According to the report, there are 51 confirmed Zika virus infections. Because of delays inherent in off-island testing, the existing ASDoH EHR system was used to identify suspected cases for outbreak tracking, and to identify pregnancies for monitoring.

“The trend in suspected cases approximated the trend in confirmed cases over time, but not by county. Collaboration among multiple public health agencies helped to mitigate these challenges and highlights the importance of continued strengthening and coordination of epidemiologic and laboratory capacity in the Pacific Islands,” the report says.