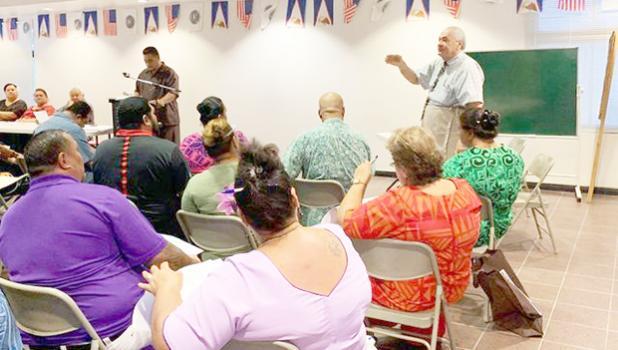 Pago Pago, AMERICAN SAMOA — Chief Election Office Dr. Lealofi Uiagalelei stands behind the final results of the House of Representatives race for Manu’a District #1 and has certified them as official, following a challenge to recount the votes.

According to the “official” results released by the Election Office after 4:30p.m on Tuesday, Nov. 10th, Vesi received 282 votes while Alumamalu got 283 votes.

Vesi submitted a “Challenge of a Recount” letter on Nov. 3rd to Uiagaleleli, who responded in a Nov. 6th letter, which the Election Office released after the 2020 general results were made official, in which Alumamalu along with Fetui are declared winners.

Vesi asserted that the one vote difference resulted from the “total of ballots and absentee ballots that have not been accounted for.”

Uiagalelei responded that upon review of election results from polling district No. 1- Manua, certified by the poll supervisor, the one ballot was openly declared “void” at the counting stage for the reason that that the ballot had more names voted for than can be elected — in accordance with local law (ASCA 6.0801).

(Local laws allow an elector on House races with two seats to vote for up to two candidates on the ballot.)

Uiagalelei explained that declaration of this single “void ballot” was witnessed by poll watchers including a poll watcher from Vesi’s campaign, and “none expressed an objection”.

“On that basis, it is my position that the void declaration by the poll supervisor was legal,” he said and points out that if the “void declaration is reversed and the ballot is validated and counted, it would only serve to increase” Alumamalu’s total count.

Concerning the issue of absentee ballots, Uiagalelei also explained that the law provides that absentee ballots “must be received by the Chief Election Officer no later than 1:30p.m on Election Day”.

“Any absentee ballots that are received after the 1:30p.m on Election Day deadline must not be opened but disposed of accordingly,” he said, and points to provisions of the law - ASCA 6.1105 and 6.1109.

Uiagalelei further explained that pursuant to the election results of District #1 - Manu’a, certified by the poll supervisor, all absentee ballots received before 1:30p.m on election day were counted and included in the finally tally.

“Please be advised... that I firmly stand behind the final results of the votes from Polling District #1- Manu’a, as certified and submitted to my office,” he concluded in his letter to Vesi.

Besides Vesi, the other incumbents who lost their seats following the general election are Shawn O. Va’a; Loia Gutu; Timusa Tini C. Lam Yuen; and, Gafatasi Afalava, according to the “official” results from the Election Office, which also confirmed House Speaker Savali Talavou Ale was re-elected.

The re-elected House members and the five faipule-elect will be sworn into office before 12noon on Jan. 3, 2021 for the new 37th Legislature, which will have only one female faipule, incumbent Andra Tereise Samoa, of Fofo.